Omar Abdullah to be Freed From Detention After 8 Months, Orders J&K Government 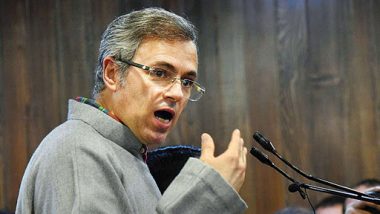 Omar Abdullah was kept in detention since August 5 when the Centre abrogated Article 370 and bifurcated the state into two Union Territories. Former Chief Minister Mehbooba Mufti, who is also under detention since J&K's special status was scrapped, tweeted: "Glad he will be released. For all their talk of Nari Shakti and women emancipation, seems like this regime fears women the most." Farooq Abdullah to be Released From House Arrest, Former Jammu And Kashmir CM's Detention Revoked.

Abdullah, along with his father and National Conference president Dr Farooq Abdullah, and Mehbooba Mufti, was detained on August 5 -- shortly before the revocation of Article 370. In the final tweet ahead of his detention, Abdullah had pitched for calm and restraint.

Omar Abdullah was detained without charges but later, the government charged him the Public Safety Act. The charges listed out in a dossier against the leader included his "ability to garner votes even during peak militancy and poll boycotts"

(The above story first appeared on LatestLY on Mar 24, 2020 11:09 AM IST. For more news and updates on politics, world, sports, entertainment and lifestyle, log on to our website latestly.com).