At least 1,000 travellers landed in Mumbai in the last fortnight from African countries where the potentially more transmissible 'Omicron' variant of coronavirus has been detected, a senior official of the city civic body said. 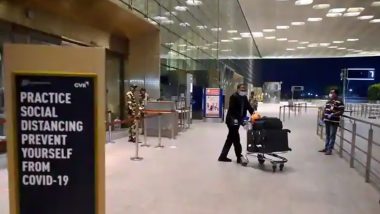 Mumbai, November 30: At least 1,000 travellers landed in Mumbai in the last fortnight from African countries where the potentially more transmissible 'Omicron' variant of coronavirus has been detected, a senior official of the city civic body said.

The World Health Organisation (WHO) on Monday warned that the global risk from the Omicron variant is “very high” based on early evidence, saying the mutated coronavirus could lead to surges with “severe consequences.”

The UN health agency, in a technical paper issued to member states, said "considerable uncertainties” remain about the variant, that was first detected days ago in southern Africa.

Amid these concerns, Kakani said the airport authority has informed that around 1,000 travellers landed in Mumbai from African countries in the last fortnight, but it has handed over a list of only 466 such passengers so far.

"Out of the 466 travellers, 100 are from Mumbai. We have already collected their swab samples. Their reports are expected soon. It will be clear if they are positive or negative to coronavirus," Kakani said.

"There won't be an issue if their test report is negative, but the civic body is going to conduct genome sequencing of positive samples, along with the S-gene missing test that is advised by the WHO for faster detection of the infection due to Omicron, without genome sequencing," he said.

If the S-gene is missing, in that case, it is presumed that he (traveller) may be infected (with Omicron), the official said, adding that the genome sequencing will confirm the infection.

The infected travellers, whether symptomatic or asymptomatic, will be shifted to the civic body's institutional quarantine facility at the civic-run Seven Hills Hospital in suburban Andheri, he said.

Amid the rising concerns over Omicron, the BMC has kept all its five hospitals and jumbo facilities ready, the official said. Measures are being taken for the structural audit, fire audit, oxygen supply system audit, stocking adequate medicines and appointment of manpower. Five jumbo centres are already functioning, he said.

"We have to upgrade the facilities. One or two wards are already activated, but as and when required, we can activate more wards in the same jumbo facilities," he added.