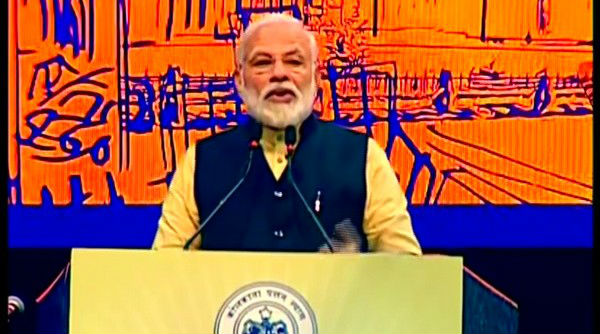 Kolkata, January 12: Prime Minister Modi said here on Sunday that ports are "gateways to India's prosperity" while emphasising that government has started the Sagarmala project to improve infrastructure and connectivity of ports.

"India's coastline is 7,500 kilometres and it is a great power for trade and tourism. After 2014, we have tried to re-energise this power of India. The work was started with new energy. Our government believes that India's ports are the opening gates to India's prosperity," said Prime Minister while speaking at the 150th-anniversary event of Kolkata Port Trust. 'CAA Made World Aware of Religious Persecution in Pakistan': PM Narendra Modi Slams Opposition in Kolkata.

"The government has started the Sagarmala initiative to improve its infrastructure and connectivity," he said. "Road, rail, interstate waterways and coastal transport are being integrated. About 575 projects worth over Rs 6 lakh crore have been earmarked. Over 200 projects worth Rs 3 lakh crore are already under development and about 125 projects have already been completed," he said.

"The connectivity of North East through waterways will emerge as a golden chapter in India's development," he said."With the construction of river waterways facilities, Kolkata Port is not only connected to the industrial centres of eastern India, but trade has also become easier for countries like Nepal, Bangladesh, Bhutan and Myanmar," Modi said.

"The time taken for cargo clearance and transport has seen a reduction due to better management on the ports. The turn-around time in the last five years has dropped down to half. This is one of the reasons in India's jump of 79 places on the Ease of Doing Business ranking table," he said.

Modi said that the government is creating a multimodal terminal in Haldia and a navigational lock-in Farakka. He also said that the work of creating the required depth is also in progress so that even larger ships can run in the Ganges.

The Prime Minister said that the government is working towards increasing the number of cruises from 150 to 1,000 which will also help West Bengal in the state's growth.Prime Minister Modi, who arrived on Saturday in Kolkata for a two-day visit also announced that Kolkata Port Trust will be renamed as Syama Prasad Mukherjee Port.