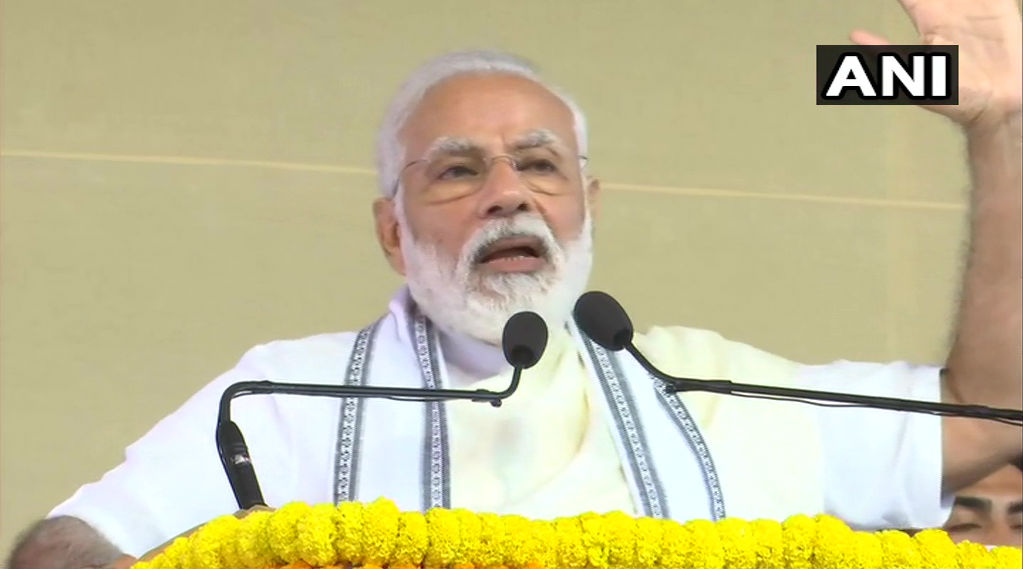 Kolkata, January 12: Strongly defending the new citizenship law, Prime Minister Narendra Modi said on Sunday the dispute that has arisen over it has made the world aware of persecution of religious minorities in Pakistan.

He, however, deplored that a section of the youth is being "misguided" over the Citizenship (Amendment) Act, which is aimed at giving and not taking away anybody's citizenship rights. PM Narendra Modi Inaugurates Sound and Light Show at Rabindra Setu (Howrah Bridge), Leaves for Belur Math by Boat; Watch Video.

"CAA is not about taking away citizenship, it is about giving citizenship. Today, on National Youth Day, I would like to tell this to the youngsters of India, West Bengal, North East that this is not an overnight law for giving citizenship. "We must all know that any person of any religion from any country of the world who believes in India and its Constitution can apply for Indian citizenship through due process. There's no problem in that," he told a gathering at Belur Math, the headquarters of Ramkrishna Mission.

Modi said even Mahatma Gandhi had favoured Indian citizenship to those fleeing religious persecution and that his government has only delivered on the wishes of the freedom fighters. Referring to anti-CAA protests in the North-East, Modi vowed to protect the distinct identity and culture of the people of the region, and asserted the new law will not hurt their interests.

"We've only done what Mahatma Gandhi had said decades ago. Should we send these refugees back to die? Are they our responsibility or not? Should we make them our citizens or not?" he said, evoking a thunderous applause by the gathering.

Modi said some people with political interests are deliberately spreading rumours about the new citizenship law, despite "complete clarity" over the CAA.

"Our initiative to amend the citizenship act has created a dispute. It is the result of our initiative that Pakistan will now have to answer why they have been persecuting minorities for the last 70 years. Human rights have been demolished in Pakistan," he said.

Seeking to assuage the concerns of the people of the North-East, Modi called the region "our pride". "Their culture, traditions and demography remains untouched by this amended law," he said. He said the citizenship law was only "changed a little" for those who were ill-treated in Pakisan after Partition. Mamata Banerjee: 'Told PM Narendra Modi During Meeting to Withdraw CAA, NRC, NPR'.

"They were having a bitter time living there. Women were in danger of losing their pride," he said. "Young people have understood the whole thing but those who want to indulge in politics over it will not," he said.

Modi said five years ago, there was disappointment among the youth of the country, but the situation has changed now. "Not just India, the entire world has a lot of expectations from the youth of the country. The youth are not afraid of challenges....they challenge the challenges," he said at the Belur Math, the abode of Swami Vivekananda for several years until his death in 1902, aged 39 years.

Modi, an ardent devotee of Vivekananda, spent the night at the Math. He has a long association with the Ramkrishna Mission order founded by Vivekananda in 1897. Inspired by the teachings of Vivekananda, Modi had arrived at the Mission Ashram in Gujarat's Rajkot and expressed desire to join the order.

Swami Atmasthananda, who later went on to become the 15th president of the Ramakrishna Math and the Ramakrishna Mission, then headed the Rajkot branch and had advised him that sanyas was not for him and that he should work among people. During those days, Modi used to regularly meet Atmasthananda and sought his spiritual guidance.

Although Modi went back after spending some time there his the relationship with Swami Atmasthananda and the Ramkrishna Mission continued. Whenever Modi used to visit Kolkata, even during his days as Gujarat chief minister, he would travel to the Math.

In 2013, during his Kolkata visit, he had gone to Belur and sought the blessings from Atmasthananda. He had in 2015 called on ailing Swami Atmasthananda at Ramakrishna Mission Seva Pratisthan, a hospital run by the Mission in south Kolkata and enquired about his health.

After Atmasthananda's death in 2017, Prime Minister Modi had termed it as a "personal loss". On Sunday, the prime minister paid tributes to Swami Vivekananda on his birth anniversary, which is celebrated as the National Youth Day, and spent some time in the spiritual leader's room in quietude.