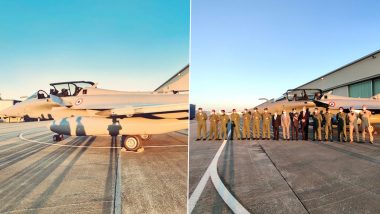 New Delhi, July 27: The first batch of five twin-jet Rafale combat aircraft has left from France for India today. The Rafale aircraft are expected to land at the Ambala airbase in Haryana on July 29 where they would be inducted by the Indian Air Force (IAF). The five planes are equipped with highly advanced weapons systems. The France-made aircraft can launch Meteor air-to-air and SCALP long-range standoff missiles. Rafale Fighter Jet Spare Parts Production Begins at Reliance Defence - Dassault Aviation Joint Venture Facility in Nagpur: Reports.

"IAF aircrew and ground crew have undergone comprehensive training on the (Rafale) aircraft, including its highly advanced weapons systems and are fully operational now. Post arrival, efforts will focus on operationalisation of the aircraft at the earliest," the Defence Ministry recently said. A total of 36 jets comprising two squadrons will be part of the IAF over the course of the next two years.

There will be 13 India-Specific Enhancements (ISEs) or upgrades on the 36 Rafale jets when they will become fully operational by October 2022. Rafale gives India an edge over both Pakistan and China in terms of air strike capability.

(The above story first appeared on LatestLY on Jul 27, 2020 12:37 PM IST. For more news and updates on politics, world, sports, entertainment and lifestyle, log on to our website latestly.com).