Rafale Jets in India Soon: First Batch of Five Rafale Jets Fly Out of France, to be Inducted Into IAF on July 29 at Ambala Airbase 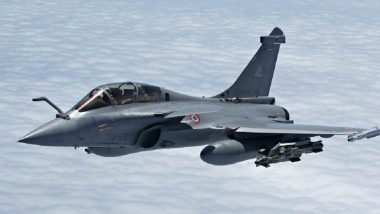 New Delhi, July 27: The first batch of five Rafale jets of the Indian Air Force (IAF) flew out of France on Monday. Dassault Aviation's Rafale jets will be inducted into the IAF at the Air Force Station, Ambala on July 29. Rafale aircraft will increase the air power of the IAF manifold. The final induction ceremony will reportedly take place in the second half of August. Know Features And Specifications of Rafale Aircraft.

The Indian Embassy in France on Monday tweeted, "The new Rafales add strategic depth and strength to India's air combat capabilities. They fly out of France today to join the growing Indian fleet of aircraft." Jawed Ashraf, Indian Ambassador to France thanked Dassault Aviation for delivering aircraft on time and French Government, and French Air Force for all the support. Indian Armed Forces Have Got 36 Rafale Fighters, 28 Apache and 15 Chinook Helicopters Since PM Modi Came to Power: JP Nadda.

Bon Voyage: Indian Ambassador to #France interacts with the Indian pilots of the Rafale. Congratulates and wishes them a safe flight to India with a single hop. #ResurgentIndia #NewIndia #Rafale@IAF_MCC @MeaIndia @rajnathsingh @Dassault_OnAir @DefenceMinIndia @PMOIndia pic.twitter.com/jk3IWD9tYU

Last week, the IAF said, "IAF aircrew and ground crew have undergone comprehensive training on the aircraft, including its highly advanced weapons systems and are fully operational now. Post arrival, efforts will focus on operationalisation of the aircraft at the earliest."

First batch of five #Rafale jets fly out of France; the aircraft will be inducted into the Indian Air Force at the Air Force Station, Ambala on July 29, subject to weather condition. pic.twitter.com/Y2pcqqmYl0

As per sources, these jets could be deployed in the Ladakh sector as part of the IAF's efforts to enhance its operational capabilities along the Line of Actual Control with China in view of the border row with the country.

Video of Rafale Jets Flying Out of France:

#WATCH Rafale jets taking off from France to join the Indian Air Force fleet in Ambala in Haryana on July 29th. (Video source: Embassy of India in France) pic.twitter.com/UVRd3OL7gZ

India had signed an inter-governmental agreement with France in September 2016 for procurement of 36 Rafale fighter jets at the cost of around Rs 58,000 crore. The aircraft is capable of carrying a range of potent weapons, including  European missile maker MBDA's Meteor beyond visual range air-to-air missile and Scalp cruise missile.

(The above story first appeared on LatestLY on Jul 27, 2020 12:35 PM IST. For more news and updates on politics, world, sports, entertainment and lifestyle, log on to our website latestly.com).