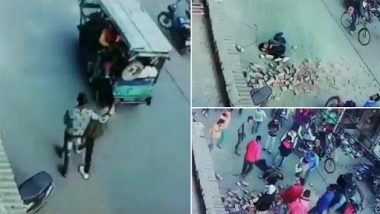 Bharatpur, December 17: In a bizarre incident, an under-construction pillar in Rajasthan collapsed on a pedestrian passing from the street. According to a video released by ANI, the pillar collapsed in a market in Bharatpur area on a pedestrian who was passing by from below it. As soon as the incident was reported, police rushed to the spot to take a stock of the situation. The person  sustained serious injuries and has been sent to the hospital for treatment. Rajasthan: Under-Construction Building Collapses in Jodhpur, 8 Dead, 6 Injured.

According to a tweet by ANI, Police informed that there was some construction work going on in a shop due to which the pillar might have collapsed. The cops, who were investigating the incident, said that the column fell from the third floor. "One person sustained serious injuries & has been sent to the hospital for treatment. We are trying to speak with the owner of the shop," says police.

#WATCH | An under-construction pillar in a market in Rajasthan's Bharatpur, collapses on a pedestrian passing by from below (16.12.2020) pic.twitter.com/N4knEBRU65

In August, a similar incident was reported from Gurugram where a section of the under-construction flyover at Sohna Road collapsed, injuring at least two people. Reports informed that the incident occurred when three girders, that had been newly installed between two pillars, came crashing down in front of Vipul Greens condominium.

(The above story first appeared on LatestLY on Dec 17, 2020 09:54 AM IST. For more news and updates on politics, world, sports, entertainment and lifestyle, log on to our website latestly.com).