The cost of key materials like cement and steel have risen over 20 per cent yearly as of March 2022. 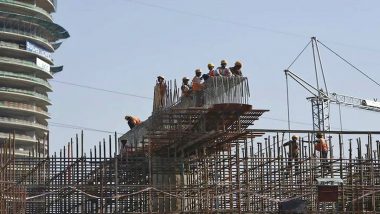 New Delhi, March 29 (IANS) Over the last one year, developers' average cost of construction has risen 10-12 per cent, owing to higher input cost due to supply-side constraints. This surge in cost comes at a time when developers have been under pressure due to higher debt and liquidity concerns over the last few years.

The cost of key materials like cement and steel have risen over 20 per cent yearly as of March 2022. These constitute a predominant share in the total cost of construction. So far, developers have been cautious about increasing prices as the market was recovering from the aftermath of Covid-19. However, developers have now started feeling the pinch of rising cost and started reviewing their pricing strategy, Colliers said in a report.

"With rising material cost, developers will be compelled to increase prices as construction materials account for about 2/3rd share in the total cost of construction. Developers have already been operating on thin margins over the last few years. Higher Attrition Rate in Indian Companies Driving Increments, Says Report.

"The rising cost will impact developers in the affordable and mid-market segments relatively more as they are already operating on lower margins. With wholesale price inflation (WPI) and material cost, both seeing a double-digit rise, the cost of construction can rise by a further 8-9 per cent by December 2022," said Ramesh Nair, CEO, India & Managing Director, Market Development, Asia, Colliers.

Residential projects in the affordable and mid-income segments carry relatively lower margins and are price sensitive. Hence, any major increase in input cost can put pressure on developers to pass it on to end-users.

On the other hand, Grade A industrial and warehousing facilities are already seeing robust demand from E-commerce players. Increase in construction cost is likely to put an upward pressure on rents due to limited availability of quality assets.

"Developers are facing high costs but are cautious to increase the price for end users as it might impact overall demand. However, if the escalated cost persists, developers may have to pass on increased overheads to the end users. Some intervention from the government in the form of lower import duty can provide some relief to developers, especially in segments with low margins," said Argenio Antao, Chief Operating Officer, Colliers India.

Overall, in the market, large Grade A developers will be able to withstand the rise in cost and may pass it on depending on the demand dynamics. However, smaller developers may seek to enter joint development agreements for specific projects to tide through the high cost.

(The above story first appeared on LatestLY on Mar 29, 2022 03:47 PM IST. For more news and updates on politics, world, sports, entertainment and lifestyle, log on to our website latestly.com).