A 16-year-old girl from Rewari in Haryana has been missing from her home since October 11. The family has alleged that the girl was enticed and taken away by a Muslim JCB driver. A case has been filled at the Khol Police Station. The police has launched the investigation and is raiding several places to trace the missing girl. 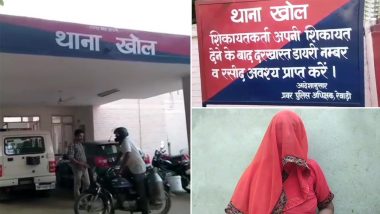 Rewari, November 2:  A 16-year-old girl from Rewari, Haryana has been missing from her home since October 11. The family members, on Monday, filled a missing person complain at the Khol Police Station. They allege that a Muslim boy enticed and took the minor girl with him. The mother of the missing girl said, "My 16-year old daughter, missing since 11th Oct, has been enticed by a JCB driver belonging to Muslim community & taken away." 21-Year-Old Woman Shot Dead Outside Faridabad College, Watch Video of the Horrific Incident.

Virendra Singh, In-charge at the Khol Police Station, said that they have started the investigation and are raiding several places to trace the missing girl. "We got a report of a minor girl missing since 11th Oct. A boy working for their family is missing, along with girl. We've registered a case & raided several places to find the girl. Once the girl is traced, everything will be revealed," said Singh. Haryana Shocker: Woman Locked Inside Toilet for Over a Year by Her Husband in Panipat Citing She Was Mentally Unstable, Rescued.

Earlier on Sunday, Haryana Home Minister Anil Vij had said that the state may have a law against 'Love Jihad'."Haryana is contemplating a law against Love Jihad," Vij informed in a tweet. This move comes after a 21-year-old was shot dead outside her college, on October 26,  in Ballabgarh.

(The above story first appeared on LatestLY on Nov 02, 2020 12:15 PM IST. For more news and updates on politics, world, sports, entertainment and lifestyle, log on to our website latestly.com).