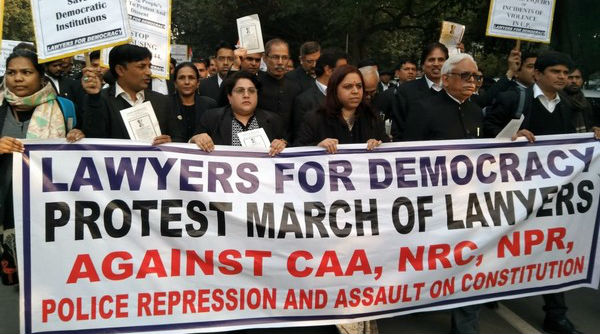 During the march, the lawyers were holding placards reading, "Save democratic institutions, Take back CAA, Stop NPR process, stop misusing Section 144, among others." "The reason for the protest is obvious. If the government does not listen to those of us who fight law inside the court, we will be compelled to come out in support of the constitution and take the issue directly in the court of people," an advocate told ANI. CAA Has Nothing to Do with NRC, Attempts to Mislead the Nation Deplorable, Says Yogi Adityanath.

"Every section of the society is raising voice against the CAA and NRC which is 'against the Constitution'. We are in solidarity with people agitating against the CAA. The social fabric of the country will remain secular and divisive forces will not be successful in their attempt," another lawyer stated.Slogans against the police were also raised during the march.

"We chanted slogans against the Delhi police for their double standard in the Jamia University and JNU. Police took action against students in Jamia whereas they remained mute spectators during JNU violence," one of the protesting lawyers said. Protests have been happening across the country against the CAA, claiming that the new law is "unconstitutional" and "discriminates on the grounds of religion".