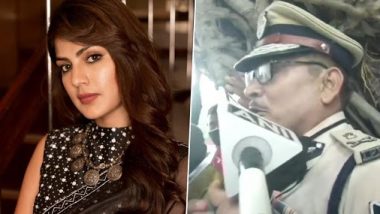 Patna, August 19: After the Supreme Court on Wednesday ordered CBI probe into the death of actor Sushant Singh Rajput, Bihar DGP Gupteshwar Pandey lauded the top Court's verdict and said the order has strengthened the trust people have in the judiciary. The DGP added that today's order has assured the nation that justice will be delivered in the actor's death case. Commenting on Rhea Chakraborty, the DGP said she is no one and has no authority to talk about Nitish Kumar, the Chief Minister of Bihar. "Bihar ke mukhyamantri pe comment karne ki aukaat Rhea Chakraborty ki nahi hai," the DGP said when asked about her comments on the Chief Minister. Sushant Singh Rajput Death Probe: Supreme Court Orders CBI Investigation.

Here's the Video of

(The above story first appeared on LatestLY on Aug 19, 2020 12:27 PM IST. For more news and updates on politics, world, sports, entertainment and lifestyle, log on to our website latestly.com).