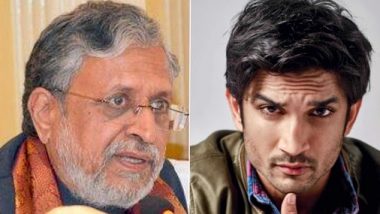 On July 29, Sushant's father KK Singh had filed an FIR in the Rajiv Nagar police station in Patna accusing six people, including actress Rhea Chakraborty, for abetment to suicide. In his complaint, Sushant's father said, "While my son was doing extremely well in Bollywood till May 2019, a girl named Rhea Chakraborty and her family members and others got in touch with him so that she could use his contacts to make a career in the film industry." Sushant Singh Rajput Case: Subramanian Swamy Questions Why Mumbai Police Hasn't Filed Any FIR Yet and Why The Actor's Post-Mortem Report Is Labelled Provisional (View Tweet).

"Rhea Chakraborty and five other persons have been charged under Sections 340, 341, 380, 406, 420 and 306 of IPC after Sushant Singh Rajput's father filed an FIR against them. Further investigation is going on in the case," Sanjay Kumar, IG, Patna Central Zone said.

When asked about demanding CBI inquiry in the death case, Maharashtra Minister Jayant Patil on Friday said that Mumbai police are investigating the matter. "Police will investigate on basis of evidence, we expect that the probe will be completed as soon as possible & police will reach to a conclusion", he said.

In Maharashtra, the opposition Bharatiya Janata Party (BJP) on Friday demanded a probe by the Enforcement Directorate and Central Bureau of Investigation into the alleged suicide of the late Bollywood actor. Rajput had allegedly committed suicide on June 14 in his flat in Bandra. Mumbai Police are already investigating the case and several people have been already been interrogated.

(The above story first appeared on LatestLY on Jul 31, 2020 04:14 PM IST. For more news and updates on politics, world, sports, entertainment and lifestyle, log on to our website latestly.com).