Tejas Express Set to Run With New 'Saffron' Look, CCTVs in Each Coach 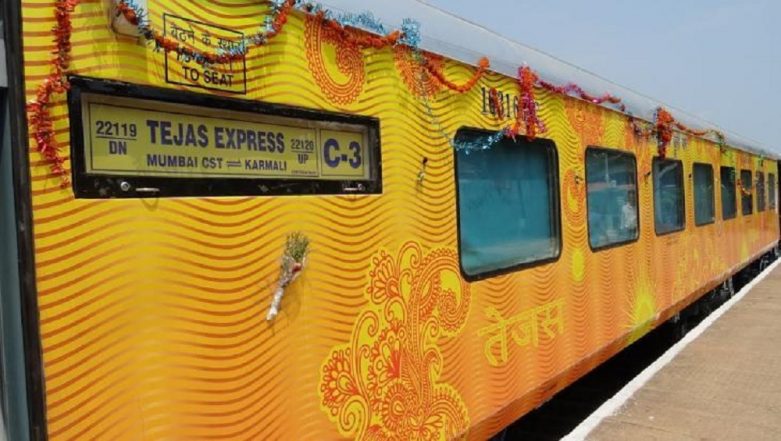 New Delhi, July 19: The second set of Tejas Express will differ in look as compared to its predecessor unit running between the Mumbai-Goa route. As per the visuals of the new rakes released earlier in the day, the train has been saffronised.

The old blue colour scheme of the train has been replaced with saffron, yellow and brown colours. The rakes, particularly from the outside, have been totally revamped with the new saffron looks.

The second set of Tejas Express is all set to be launched in the near-future. The route, on which it will run, has not been confirmed so far. The train will either ply on the New Delhi-Chandigarh line or the Anand Vihar (Delhi)-Lucknow route.

The Tejas Express which will either run between New Delhi to Chandigarh or Delhi's Anand Vihar to Lucknow is all set to run with pace. The old blue colour scheme of the train has been replaced with saffron, yellow and brown colours. CCTVs are installed in every coach: Railways pic.twitter.com/aMsvpDCymb

Each coach of the Tejas Express is fitted with CCTV installations, news agency ANI reported. LED screens will be also be provided for each passenger, with on-demand entertainment facilities.

The curtains on windows of the coach could be raised or lowered using buttons only. Unlike the regular coaches, the curtains will be fitted in between the two panes of the glass window. For convenience of inter-coach mobility, automatic interconnected doors have also been provided.