Through the Lens of Ahmed Najm: History and Present

Despite having a rough childhood and a tragic incident of losing his brother, Najm believes in restoring peace in the world. If his camera cannot bring a difference, it should at least leave an ever-lasting impact on all those who see his art - that is the sole achievement of his lens. 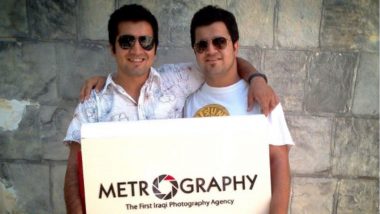 When we look at successful people's profiles, certain traits distinctly stand out. For some, it is their glamour, and for some, it is their brain. For artists like Ahmed Najm, they can take the past's learnings and shape them into a beautiful future. It is their art and their contribution to society that shines through, despite all hardships and struggles.

Ahmed Najm, the 29 years old photojournalist and Iraqi entrepreneur, has made his mark by being unstoppable under the utmost adverse situations. Currently, he is the managing director of Metrography Agency, the first and only photo agency in Iraq. But, this entrepreneur stays engaged in several activities and ventures. He is also the Vice President at Vim Foundation and is also the editor-in-chief of @humansofkurdistan_. As a renowned photojournalist, he also served as a jury member of the 2019 World Press Photo Contest.

Born in Kirkuk, Iraq, Najm grew up in the civil war era amidst the chaos and uncertainties. His parents had to flee Iran twice in the first seven years of his life, before their Iraq displacement. This childhood experience introduced him to war crises at a very early age. Such experiences laid the foundation of compassionate adulthood in him.

Najm's company, Metrography, was founded by his brother, Kamaran Najm, and Sebastian Meyer. In June 2014, Kamaran was kidnapped by an armed group covering the first battle between ISIS fighters and Iraqi security forces. Since then, Ahmed Najm has been carrying the reins of his brother's dreams on his shoulders. He made Metrography Agency, the first photo agency in Iraq, working towards his brother's goals.

He also attempted to look for his brother at several places, only to confront the rage in the families of ISIS-victims. With the first-hand experience at war and its aftermath, Najm believes that as much as people think they care about fighting, they should also care about its impact on those left behind.

Building the brand name of Metrography, Najm currently supervises 73 photojournalists who record the unsaid stories of several Iraqi communities and religions. With his covering the fight against ISIS, he also trains independent photojournalists in Iraq, Iran, and Turkey.

To reach out to a broader public and bring out stories least known, he has also trained 15 women photojournalists. He has prepared them to fetch the reports that are beyond the grasps of their male counterparts and discuss the feminine perspective through their pictures. Metrography also organizes an annual photo festival in five Iraq cities to inspire the youth and the old alike.

Despite having a rough childhood and a tragic incident of losing his brother, Najm believes in restoring peace in the world. If his camera cannot bring a difference, it should at least leave an ever-lasting impact on all those who see his art - that is the sole achievement of his lens.