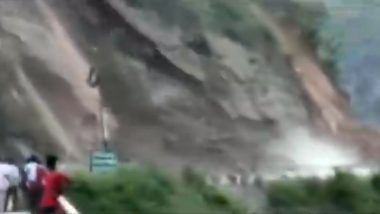 Chamoli, July 27: A massive landslide occurred near Indo-Tibetan Border Police (ITBP) camp in Gauchar town of Uttarakhand's Chamoli district on Monday morning. Due to these landslides, Badrinath Highway has been blocked. Operations are underway to clear the highway is underway. Video of the landslides also surfaced on social media.

In the video shared by news agency ANI, at the time of landslides, several people were also present at the spot. Many commuters and tourists have been stranded due to these landslides. A huge traffic jam could also be seen on the highway. Uttarakhand Rains: Portion of Bridge Collapses at Madkhot on Pithoragarh-Munsyari Road Following Heavy Rainfall, Watch Video.

Video of Landslide in Gauchar:

#WATCH Uttarakhand: A landslide occurred near ITBP camp in Gauchar of Chamoli district this morning, blocking Badrinath Highway. The operations to clear the highway is underway. pic.twitter.com/UHaP1AGnih

Heavy rains lashed the state in the past few days. According to weather.com, Uttarakhand is likely to witness heavy to very heavy rain and thunderstorms over its eastern region on Monday. Two persons are reported to be trapped under debris after their houses collapsed following torrential rains in Uttarakhand's Pithoragarh district on July 27.

(The above story first appeared on LatestLY on Jul 27, 2020 09:43 AM IST. For more news and updates on politics, world, sports, entertainment and lifestyle, log on to our website latestly.com).