IMD said that heatwave conditions are very likely to prevail in isolated pockets over Gujarat state during the next 5 days, and over Bihar from April 25-26. 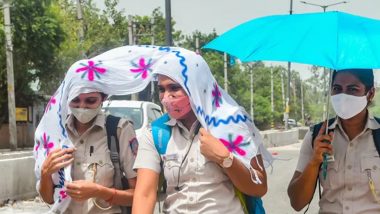 Mumbai, April 25: Amid the rising heatwave conditions across the country, India Meteorological Department (IMD) on Monday said that light isolated to scattered rainfall accompanied with isolated thunderstorms and lightning is very likely over the Western Himalayan Region and Duststorm or thunderstorms over the adjoining plains of Punjab and Haryana on April 25.

The weather agency also said that due to wind confluence and trough/wind discontinuity over peninsular India in the lower tropospheric levels, isolated to scattered rainfall with a thunderstorm, lightning and gusty winds with speeds reaching 30-40 kmph is very likely over Kerala, Karnataka, Tamil Nadu, Telangana, and Chhattisgarh during next the 5 days; over Andhra Pradesh on April 27-28. Weather Update: Delhi To Experience Heatwave Conditions From April 28 Onwards.

Besides the weather agency has also forecasted thunderstorms, lightning, and gusty winds with speeds reaching 30-40 kmph at isolated places very likely over Assam, Meghalaya during the next 5 days and over Sub Himalayan West Bengal, Sikkim, Arunachal Pradesh, Nagaland-Manipur-Mizoram-Tripura during the next 24 hours.

♦ Heat wave in isolated pockets over Gujarat state during next 5 days; over Bihar during 24-26; over Madhya Maharashtra, Jharkhand, Odisha, Gangetic West Bengal during 25-28; over Rajasthan, south UP, MP, Vidarbha during 26-28 and over Punjab & south Haryana on 27 & 28 April.

While the rains and thunderstorms might bring respite from the scorching temperatures, the IMD said that heatwave conditions are very likely to prevail in isolated pockets over Gujarat state during the next 5 days; over Bihar from April 25-26; over Madhya Maharashtra, Jharkhand, Odisha, Gangetic West Bengal from April 25-29; over Rajasthan, south Uttar Pradesh, Madhya Pradesh, Vidarbha from April 26-29, and over Punjab and south Haryana from April 27-29.

(The above story first appeared on LatestLY on Apr 25, 2022 10:44 AM IST. For more news and updates on politics, world, sports, entertainment and lifestyle, log on to our website latestly.com).