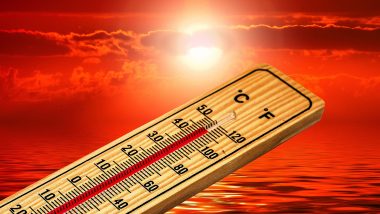 As per the India Meteorological Department (IMD) records, the all India cumulative rainfall during this year's pre-monsoon season's rainfall scenario, i.e., from March 1 to May 11, is below long period average (LPA) by minus 25 per cent while over Northwest India, it is above LPA by minus 78 per cent and over Central India it is minus 56 per cent. March and April both were dry and hot due to heatwaves.  Weather Forecast: 'Thunderstorm Likely Over Maharashtra, Goa, and Kerala' Says IMD; Heatwave Conditions To Prevail Over Uttar Pradesh and Rajasthan

For East and Northeast India, it is merely minus 1 per cent deficient while for South India, it is excess at plus 35 per cent.

Northwest India remained mostly dry even when there was a movement of a Western Disturbances (WD) during the first half of the week that had caused widespread rainfall / thunderstorm activity over Jammu & Kashmir and Ladakh on a single day and isolated to scattered rainfall / thunderstorm activity on three to four days during the week. Weather Forecast: No Respite From Heatwave in Northwest India For Next Two Days, More Rain Likely in Parts of Tamil Nadu And Kerala

"Movement of these systems along with convergence of moist southeasterlies over the region had caused isolated to scattered rainfall / thunderstorm activity over remaining parts of Western Himalayan Region also on many days during the week; isolated hailstorm activity also had been reported from the Western Himalayan Region on one or two days along with it.

"This WD in together with lower troughs / cyclonic circulations in the lower tropospheric levels had caused isolated to scattered rainfall / thunderstorm activity over plains of Northwest India and adjoining areas of Madhya Pradesh on two to three days during first half of the week," IMD scientists said.

The Extended Range Forecast has also predicted heavy rainfall for the coming week for large parts across the Northeast states and in the Southern peninsula. For Northwest India, a fresh Western Disturbance is likely to affect Western Himalayan Region from May 16 and under its influence, isolated to scattered rainfall with thunderstorm / lightning and hail very likely over Western Himalayan Region during May 16 to 18.

(The above story first appeared on LatestLY on May 13, 2022 02:33 PM IST. For more news and updates on politics, world, sports, entertainment and lifestyle, log on to our website latestly.com).