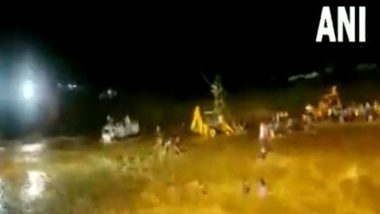 Kolkata, October 6: Seven persons have been killed and several others are feared missing following a flash flood in Mal river at Malbazar in West Bengal's Jalpaiguri district while local Durga Puja organisers assembled at the river bank for immersion of the Durga idols on the occasion of Dussehra, police said. The Jalpaiguri District Magistrate, Moumita Godara Basu confirmed the death toll as seven.

"Several people assembled at the Mal river bank at 9 p.m. when the flash flood swept several people. The administration immediately stopped the immersion of idols there. By late Wednesday evening seven bodies had been recovered. Nearly 40 persons have been rescued who were swept by the flash flood and got stuck on a local island," the District Magistrate said. Video: Major Accident Averted During Ravan Dahan in Haryana’s Yamunanagar After Burning Effigy Falls on People Gathered.

However, state police sources said that because of the evening hours, the rescue teams are facing difficulties in the rescue operations. "It will take some more hours, at least till tomorrow morning, to gauge the exact number of casualties and missing persons so far," a district police official said. West Bengal: At Least Eight Drown in Flash Floods During Idol Immersion in Jalpaiguri.

He also added that the exact number of missing persons are yet to be ascertained. The local Trinamool Congress MLA from Mal Assembly constituency, Bulu Chik Baraik said that besides the administration the local people are also assisting the rescue teams in their operations. "The evening hours are posing difficulty in swift rescue operations," he added.

(The above story first appeared on LatestLY on Oct 06, 2022 08:57 AM IST. For more news and updates on politics, world, sports, entertainment and lifestyle, log on to our website latestly.com).