What Do You Do When You Find the Holy Grail? How the Owner of the World’s Rarest Baseball Card set is Navigating NFTs

The set’s owner was 14 years old when he opened a family chest from St. Louis. Already an avid baseball card collector, he was surprised to find something he had never seen before: a handful of striking, sepia-colored 3x4 baseball cards from the Plow’s Candy company. 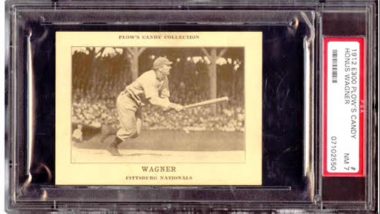 Mark Cuban says to “get over the perception you have to physically be able to touch it”. Gary Vaynerchuk swears by a combination of digital and offline assets. As the non-fungible token (NFT) debate rages on, everyone from Tom Brady to the NBA is embracing the latest trend to hit the blockchain. NFTs are transforming how we buy, sell and claim ownership of unique assets. But they’re also raising a critical question for collectors: When you find the Holy Grail, how do you maximize its value?

For the owner of the world’s rarest baseball card set, the answer is clear: Provide a physical, digital, and interactive experience worthy of the set that PSA, the industry’s top authenticator, describes as “taking rarity to the limit.”

The Rise of NFTs for Sports Memorabilia

By all measures, NFTs have firmly entered the mainstream. As of March 2021, the combined market cap for major NFT projects has skyrocketed 1,785%, with NFTs trading at $1.8 billion, according to the Wall Street Journal. The world of sports memorabilia is fertile ground for NFTs. NBA TopShop, which launched just last year, has raked in more than $280 million through the sales of short licensed clips from NBA games. Tom Brady is busy laying the groundwork for Autograph, his NFT company for unique digital collectibles. And when trading card brand Topps went public earlier this year, its plans to use NFTs as a “secondary market” for collectibles helped drive a $1.3 billion valuation.

Amid the meteoric rise of NFTs, sports memorabilia has experienced a similar upward trajectory. Baseball cards lead the pack. The T206 Honus Wagner, referred to as the Mona Lisa of baseball cards, sold for $3.25 million in 2016. In January, a 1952 Mickey Mantle sold for $5.2 million. Midway into 2021, the dual rise of NFTs and baseball card values are setting the stage for one of the most important sales to hit sports memorabilia: the 1912 Plow's Candy Baseball Cards set (E300). The combined value of the ultra-rare physical cards, NFT rights and experiential elements could make the “Miracle Set” the most valuable in the world.

The ‘Miracle Set’ on Deck for NFT

The set’s owner was 14 years old when he opened a family chest from St. Louis. Already an avid baseball card collector, he was surprised to find something he had never seen before: a handful of striking, sepia-colored 3x4 baseball cards from the Plow’s Candy company. Tucked carefully in the back of a family photo album, those cards launched a 44-year journey—one that will culminate in May with the sale of his “Miracle Set” NFT experience.

The 1912 Plow's Candy Baseball Cards set was the passion project of entrepreneur Edward Plows. A confectioner in turn-of-the-century Chicago, then considered the confectioners capital of the world, Plows was eager to edge out local competitors like Cracker Jack. He did so by tying his business to the city’s other great love: baseball. The first card set produced by a confectionery company in the Midwest, the Plow’s Candy Baseball Cards were hand-delivered with gourmet chocolate orders between 1913 and 1915. Their oversized format and unique designs made the cards both expensive to produce—$10 each by today’s standards—and cherished by the Chicagoans who received these limited-run heirlooms.

Of the 180 cards produced by Plow’s Candy, only 69 individual player cards have ever been documented. The “Miracle Set” features 61 individual player cards, including four of the five original Hall of Fame inductees. “Imagine a set that contains Ty Cobb, Walter Johnson and Christy Mathewson as three of the most desirable keys, yet every other issue in the set is a virtual equal in the rarity department,” said PSA, the gold-standard authenticator for baseball cards and other collectibles. In all, the set includes 17 Hall of Famers, each captured in stunning action photography by Chicago photographer Francis P. Burke. But the “crown jewel” of the set may be the 1 of 1 Honus Wagner card rated by PSA as a 7 in “near mint” condition.

“As treasure hunters, we all relish that moment of finding untouchable rarity,” said Dave Drever, the collector’s representative and founder of the NFT marketplace TreasureHunter.io. “But what do you do when you find the Holy Grail? We’re providing a multidimensional, multimedia experience that reflects what’s next in the NFT space and pays homage to the story behind the cards.”

As the NFT space evolves, the debate about capturing maximum value rages on. Cuban says you don’t necessarily need the physical item. Vaynerchuk recommends a combination of digital and offline assets. But Dan Fleyshman, Founder of Elevator Studios, says “The clear answer about digital vs. physical is BOTH are important & BOTH have passionate fan bases. It’s not an either/or scenario, just like credit cards vs. cash. They both have use cases. Some people like to hold basketball cards, have art on their walls, and carry cash. Others prefer NBA Top Shot and NFT art while paying for things with credit cards and Bitcoin.”

For the “Miracle Set” owner, the way to maximize NFT value is through an experience that reflects the significance, and history, of his Plow’s Candy collection. That experience includes the physical cards; NFT rights; a published book on the set’s history; a completed feature film script and documentary in development with Sundance Film Festival award winner, Darren Foster, attached to direct the project; and Trademark IP for Plow’s Candy Company that could be used for candy store establishment at MLB Ballparks.

“Right now, people think of NFTs as one dimensional,” Drever said. “We’re delivering a physical, digital and interactive experience that could make this ultra-rare collection the world’s most valuable baseball card set.”