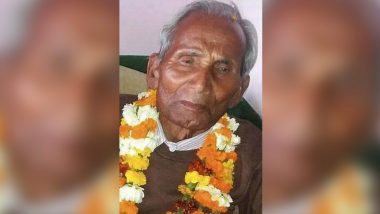 New Delhi, April 20: Uttar Pradesh Chief Minister Yogi Adityanath’s father Anad Singh Bisht died on Monday. Anand Singh Bisht was undergoing treatment at All India Institute of Medical Sciences (AIIMS) in Delhi. He was suffering from kidney and liver ailments. Bisht was admitted to AIIMS on April 13. The UP Chief Minister’s father was on a ventilator as his heath condition deteriorated in the past few days. Yogi Adityanath Govt to Bring Back 6000 UP Students from Kota Amid Coronavirus Lockdown.

Uttar Pradesh's Deputy Chief Minister Keshav Prasad Maurya expressed condolence over the demise of Adityanath's father.  He said that it was very saddening to hear the news of Bisht's death. Maurya added that god should give strength to the family. UP CM Yogi Adityanath's Father Anand Singh Bisht Critical, Kept on Ventilator at AIIMS Delhi After His Health Deteriorates.

Bisht was a resident of Panchor village of Uttarakhand’s YamKeshwar area. He retired from the post forest ranger in 1991. He has seven children. Adityanath is his second child. Since Sunday evening, there were rumours on social media about his Bisht’s death. However, at that time, there was no official confirmation from doctors at AIIMS.

Notably, Yogi Adityanath left his home around the 1990s to join the Ayodhya Ram temple movement. He became disciple of Mahant Avaidyanath, the chief priest of the Gorakhnath Math in 1993.

(The above story first appeared on LatestLY on Apr 20, 2020 12:00 PM IST. For more news and updates on politics, world, sports, entertainment and lifestyle, log on to our website latestly.com).