Israel Embassy Blast: NIA Releases Video Of 2 Suspects In Connection With The Explosion That Happened In January 2021 In Delhi; Watch Video

The NIA releasing the video also announce reward of Rs 10 lakh for identifying the individuals spotted roaming on the spot on the day of attack. Delhi Police said that a low intensity IED blast went off around 5 pm on Abdul Kalam Road. 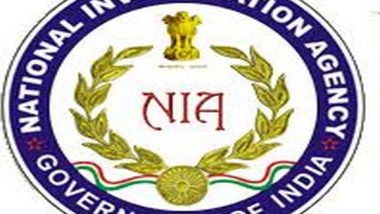 New Delhi, June 15: National Investigation Agency released a video of suspected two men involved in a blast near the Israel Embassy in January earlier this year.

The NIA releasing the video also announced a reward of Rs 10 lakh for identifying the individuals spotted roaming at the spot on the day of attack. Agency has sought more information for identifying suspected men seen on CCTV footage.

#WATCH | CCTV footage of suspects in a blast that took place on January 29th outside the Israel Embassy in Delhi.

A minor blast took place near Israeli Embassy On January 29, just 150 metres away from the embassy. Multiples vehicles were damged due to the blast, with One injured. Delhi Police said that a low intensity IED blast went off around 5 pm on Abdul Kalam Road. The blast damaged vehicles and window panes of vehicles parked around.

Just after the blast CISF issued alert for important offices, airports and government buildings to increase security measures. Israel In their statement said that all the diplomats an staff were safe and sound.

(The above story first appeared on LatestLY on Jun 15, 2021 07:31 PM IST. For more news and updates on politics, world, sports, entertainment and lifestyle, log on to our website latestly.com).