BS Yediyurappa Resigns As CM of Karnataka: Who Will Be New Karnataka CM? Check List of BJP’s Possible Frontrunners for the Key Post

Yediyurappa's resignation announcement came at a special event organised to present the government's report card on the occasion of the completion of two years of the BJP-led state government in the current term, at Vidhana Soudha. 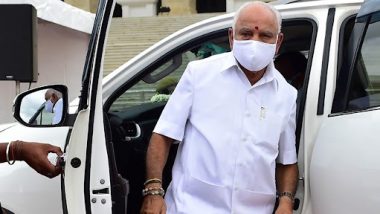 Bengaluru, July 26: BS Yediyurappa has resigned from the post of Chief Minister of Karnataka today. Earlier, Yediyurappa had dropped enough hints that he would resign as the Chief Minister of the southern state and told reporters that he was ready to accept any decision made by the BJP high command after July 25, as he would be completing two years in office on July 26. The 78-year old BJP veteran said he will submit his resignation to Governor Thawar Chand Gehlot today. Karnataka CM BS Yediyurappa Announces Resignation.

Yediyurappa's resignation announcement came at a special event organised to present the government's report card on the occasion of the completion of two years of the BJP-led state government in the current term, at Vidhana Soudha. "I have decided to resign. I will meet the Governor after lunch," said Yediyurappa today. BS Yediyurappa Quits: Karnataka Chief Minister Steps Down From His Post, Says Will  Submit My Resignation to Governor Today.

BS Yediyurappa Resigns from CM Post; What next for Karnataka?

After Yediyurappa's resignation, all eyes will be on who will be the next Chief Minister of Karnataka. Names of several leaders have been doing the rounds for the key post and stakes are high for some leaders from the community itself. BJP leaders from the community including Basangouda Ramangouda Patil Yatnal, Arvind Bellad and Murugesh Nirani are believed to be the front runners in the race. Karnataka Home Minister Basavaraj Bommai's name is also being mentioned.

Reports inform that the Panchamasali Lingayat community has been demanding the chief ministerial post for several months now. Meanwhile, Former union minister DV Sadananda Gowda and BJP general secretary CT Ravi are also the potential candidates to be the next chief minister if the party high command gives priority to the Gowda community. Also, R Ashok and CN Ashwathnarayan are the other popular figures from the community.

According to a report by the Times of India, sources said that the BJP has shortlisted eight leaders for the Karnataka CM post. The BJP's possible frontrunners for the next Karnataka CM include Dharwad West MLA Aravind Bellad, Vijayapura MLA Basannagouda Patil Yatnal, Karnataka Mines and Geology Minister Murgesh R Nirani and Basavaraj Bommai, all belonging to the Panchamasali Lingayat community.

(The above story first appeared on LatestLY on Jul 26, 2021 01:18 PM IST. For more news and updates on politics, world, sports, entertainment and lifestyle, log on to our website latestly.com).