Prakash Jarwal of the Aam Aadmi Party (AAP) won the Deoli SC assembly constituency. Jarwal defeated his nearest rival from the Bharatiya Janata Party (BJP) candidate Arvind Kumar with a margin of over 40,000 votes. Jarwal is also the sitting MLA from this constituency. 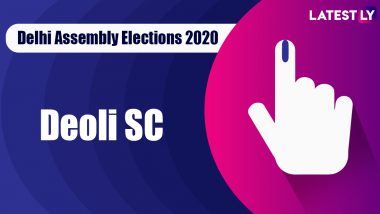 The constituency is part of South Delhi Lok Sabha seat. It is reserved for scheduled castes. In Deoli SC assembly constituency, a total of 11 candidates were in the fray. Voting in Deoli SC for the Delhi Assembly Elections 2020 took place on February 8. The Election Commission of India (ECI) on January 6 announced the election schedule for Delhi. Arvinder Singh contested on the Congress ticket. Delhi Assembly Election Results 2020 Predictions by Satta Bazaar: AAP Likely to Retain Power, BJP And Congress Far Behind, Say Matka Players.

(The above story first appeared on LatestLY on Feb 11, 2020 05:48 PM IST. For more news and updates on politics, world, sports, entertainment and lifestyle, log on to our website latestly.com).