The Aam Aadmi Party (AAP), led by Arvind Kejriwal, is expected to retain power in the February 8 Delhi assembly elections, according to bookies in satta bazaar. 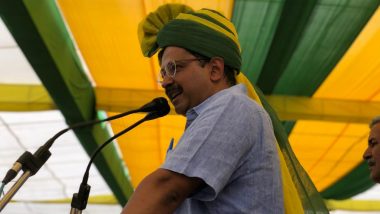 New Delhi, January 31: The Aam Aadmi Party (AAP), led by Arvind Kejriwal, is expected to retain power in the February 8 Delhi assembly elections, according to bookies in satta bazaar. If matka players are to be believed, the Bharatiya Janata Party (BJP) and the Congress could come distant second and third respectively. If their predictions come true, Arvind Kejriwal will become Delhi Chief Minister for the third time. Delhi Assembly Elections 2020: Hits And Misses of Arvind Kejriwal's AAP.

According to reports, the satta bazaar expects the AAP to win 56-58 seats in the 70-member House. The AAP registered a landslide victory in the 2015 Delhi assembly elections, sweeping 67 seats. The BJP is projected to bag 11-13 seats, up from 3 that the saffron party had bagged in the previous polls. Matka players believe the Congress, which drew a blank last time, could win 2-3 seats. Even before the campaigning for the Delhi assembly elections started, the satta bazaar is banking high on Kejriwal's AAP. Fact Check: Did Aam Aadmi Party's First List Include 21 Muslim Candidates? Here's The Truth.

However, an internal survey conducted by the BJP, showed the saffron party wresting power in the national capital. According to the survey, conducted by the Global Action Young Network, the BJP might win 42 seats out of Delhi's 70 seats, while the ruling AAP was projected to bag 26 seats. The Congress may win just two seats, BJP's internal survey predicted. According to IANS/C-Voter Delhi Tracker data, the BJP is gaining support steadily.

The IANS/C-Voter Delhi Tracker survey projections on January 6, when the Election Commission had announced the schedule for the Delhi assembly elections, had given the AAP 53.3 per cent of votes and a seat tally of close to 59, while the BJP got 25.9 per cent of votes and just eight seats. The BJP has managed to reduce the gap in terms of voter shares and secured 31.2 per cent of voter approval in the last week of January.

According to the data for the week beginning January 27, the BJP has secured 31.2 per cent of voter approval. The AAP, on the other hand, dropped from 53.8 per cent to 50.6 per cent, showing a 3.2 per cent decline in popularity. The 70-member Delhi Assembly will go to the polls on February 8 and the results will be announced on February 12.

(The above story first appeared on LatestLY on Jan 31, 2020 03:39 PM IST. For more news and updates on politics, world, sports, entertainment and lifestyle, log on to our website latestly.com).