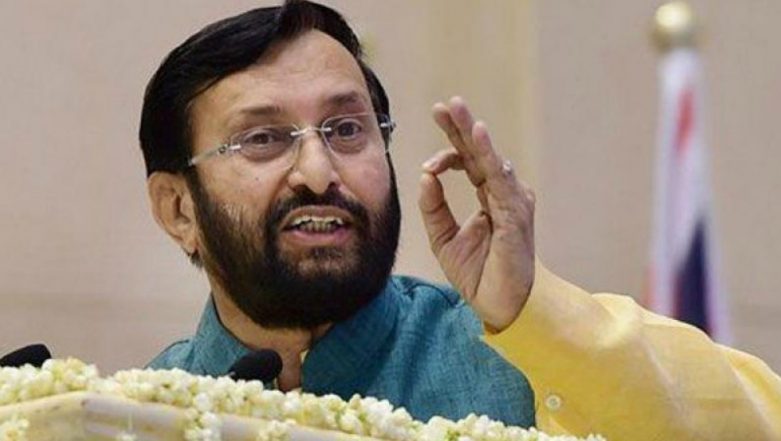 In an interview to IANS, the Minister said: "Our party will contest the coming elections on three parameters: First, who can make the nation secure, second, who can develop the country, and, third, who can be the best leader to guide the nation." Lok Sabha Elections Results 2019 Prediction by Satta Bazar: BJP to Win Over 250 Seats, Congress 74, Says Matka.

As Prime Minister Narendra Modi comes up as the only answer on all three issues, "we are sure to cross the 300-seat mark in these elections. This is possible as people have also become confident of his working style in the last five years".

Even opposition parties feel diffident and were aware that they can't beat the BJP alone. Hence they have decided to form a grand alliance, he said.

"But looking at the present conditions, it seems as if the grand alliance is still born."

"Things are not going great in Bihar too."

With no consensus on vision, leadership and mission, the grand alliance idea was a flop, said Javadekar. "In fact, the SP-BSP in UP have clearly shown the doors to Congress and have said that your strength is just two seats. This speaks volumes."

According to him, people think differently in Assembly and Lok Sabha elections. Their preferences and choices also differ.

As the BJP lost the state Assembly elections in 2018 paving way for Congress to form the government in Rajasthan, Javadekar said: "Now, for Lok Sabha elections, people are rooting for growth, progress and security of the nation."

Asked about former Chief Minister Vasundhara Raje, he said: "Raje is now BJP's national Vice President. She has been campaigning in different states for the BJP. Also, she is all ready to avenge our defeat in Assembly elections."

Asked why no woman was given ticket by the BJP in Rajasthan, he said: "The complete list is yet to be released."