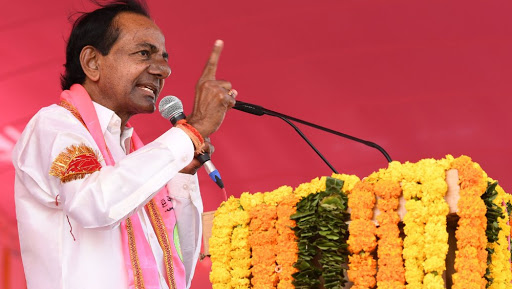 New Delhi, May 15: The Federal Front, proposed by Telangana Chief Minister K Chandrasekhar Rao or KCR for the formation of a non-BJP and non-Congress government at the Centre after the 2019 Lok Sabha elections, is open to take support from the grand old party, a spokesperson of the Telangana Rashtra Samithi (TRS) said on Tuesday. TRS spokesman Abid Rasool Khan, however, emphasised that the Federal Front will win enough seats to claim a majority.

"We are confident that we will get the numbers to form the government but if we are short of numbers and Congress wants to extend outside support we will consider," Khan told news agency IANS. Asked if the Federal Front will seek Bharatiya Janata Party's (BJP) support, the TRS leader ruled out the possibility saying: "It will only be a coalition of secular parties." Khan also clarified that the Federal Front won't leave driver's seat (prime minister's post) in case it needs Congress's backing. Election Commission Cautions KCR for Communal Remarks.

The TRS had earlier said that it would not do any business with the Congress. The change in the party's stance came a day after TRS chief KCR met DMK President MK Stalin. While KCR reportedly discussed the Federal Front, Stalin invited him to join the United Progressive Alliance (UPA), headed by the Congress. KCR had mooted the idea of non-BJP and non-Congress front last year and since held talks with leaders of various regional parties. Last week, he held talks with his Kerala counterpart Pinarayi Vijayan. KCR Bats for New Acts to Overhaul Governance in Telangana.

Earlier, sources also said that KCR may not be averse to extending support to Congress-led government at the Centre. Asked if KCR aims at Prime Minister's post, Khan said: "He is doing this in the interest of the country. The country is today heading towards anarchy. The way BJP is acting it has definitely sabotaged the interests of the country. The Congress during its 60-year-rule did nothing for minorities and Dalits. KCR is of the opinion that we should form the Federal Front and take charge in Delhi."