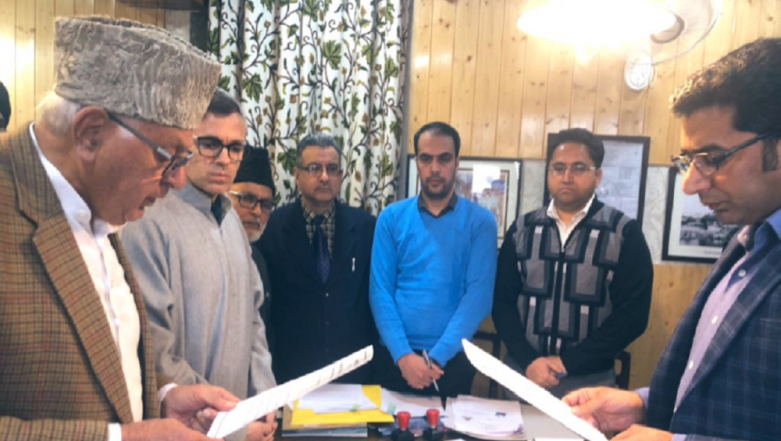 Srinagar, March 25: National Conference (NC) president Farooq Abdullah Monday filed nomination papers from the prestigious Srinagar Lok Sabha seat which is going to polls in the second phase of the general election on April 18. Abdullah, who is seeking re-election from the constituency, was accompanied by his son and NC vice-president Omar Abdullah and other leaders of the party to the office of Returning Officer Srinagar.

There was no pomp and show as only few vehicles of the NC leaders were allowed inside the deputy commissioner's office complex in Tankipora area of the city here. The police had barricaded the entire area as part of the security arrangements to prevent any untoward incident and did not allow any supporters to the venue. Farooq Abdullah Pitches for Early Polls in Jammu and Kashmir.

"I am still young and have to do a lot of work. We have to save our country from communal forces. Our fight is against communal forces," 83-year-old NC president said. Meanwhile, journalist-turned-politician Khalid Jehangir also filed his nomination papers on Monday - his first plunge into electoral politics -- as BJP candidate. Jehangir, who is the spokesman of the BJP, was accompanied by former president of the party's state unit Sat Pal Sharma and other leaders of the party.

Speaking to reporters, Jehangir said his slogan for the polls is "stop lying and start telling the truth". "The people of Kashmir have seen their leaders lying right since 1947. Today, I appeal all the leaders to tell people the truth and be honest with them," he said. The Srinagar Lok Sabha seat is spread over three districts of Srinagar, Budgam and Ganderbal. It has 12,90,318 voters who are eligible to cast their votes at 1,716 polling stations set up in the constituency.