Goa CMO has made special arrangements for the public to pay their last respect and announced the last rites would take place in Miramar at 5 PM. 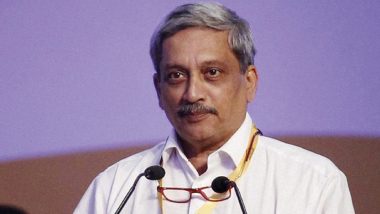 Panjim, March 17: Following the death of sitting Chief Minister of Goa Manohar Parrikar, nationwide condolence messages are pouring in. With the entire nation grieved after the demise of one of their favourite leaders, the Chief Minister Office has made special arrangements for the public to pay their last respect and announced the schedule to the last rites journey on their social media handle.

According to the program plan, shared by the Goa CMO, the last rites of Late CM Manohar Parrikar will take on Sunday morning onwards. Manohar Parrikar's mortal remains to be kept at the BJP's head office in Panjim from 9.30 am to 10.30 am. After that, it would be kept Kala Academy in Panjim. Manohar Parrikar Death: Centre Announces National Mourning on March 18; State Funeral To be Accorded to Late Goa CM, National Flag To Fly At Half Mast.

The remains of Parrikar would be kept for the public – to pay last respect – at Kala Academy from 10.30 am to 4 pm. After that, the funeral procession will begin till Miramar, following which the Antim Kriya would be performed at 5 pm.

Life and times of Manohar Parrikar:

Soon after the news arrived that Parrikar died in Goa, the Centre announced national mourning on March 18. Also, State funeral will be accorded to him and National Flag will fly at half-mast in the National Capital & capitals of States & UTs.

It is to be known that Parrikar was suffering from pancreatic cancer for a long time and even went to the United States for the treatment in March to June in 2018. The confirmed news of his demise arrived after President Ram Nath Kovind announced it on Twitter and shared his condolences.

(The above story first appeared on LatestLY on Mar 17, 2019 10:55 PM IST. For more news and updates on politics, world, sports, entertainment and lifestyle, log on to our website latestly.com).