Nokha Vidhan Sabha seat lies in the Rohtas district of Bihar. The Assembly seat of Nokha comes under the Karakat Lok Sabha constituency of Bihar. 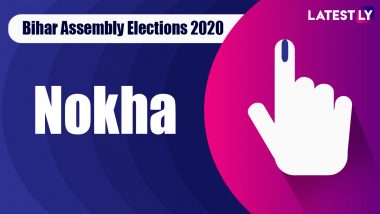 Nokha Vidhan Sabha seat lies in the Rohtas district of Bihar. The Assembly seat of Nokha comes under the Karakat Lok Sabha constituency of Bihar. While it had been a Bharatiya Janata Party (BJP) dominated seat for years, it was taken by the Rashtriya Janata Dal (RJD) in the 2015 election. RJD's Anita Devi yet again won the seat in Bihar Assembly Elections 2020. Voting for the Nokha Assembly election took place on October 28 in the first phase of Bihar Assembly Elections 2020. The counting of votes for the Bihar polls took place on November 10.

Bihar Assembly Election 2020 took place in three phases as compared to five phases in 2015 due to the COVID-19 situation. In Phase 1, 71 constituencies went to polls.

The candidates for the Nokha Assembly election in Bihar were RJD's Anita Devi, LJP's Krishna Kabir and JDU's Nagendra Chandrawansi among others. The 2015 Bihar Vidhan Sabha election on the Nokha seat was won by RJD's Anita Devi, who defeated Rameshwar Prasad of the BJP.

Bihar Assembly Elections 2020 are the first big polls in the country amid COVID-19. It was being said that the government's handling of the Coronavirus situation in the state would play a major role in deciding who wins the election. While the major fight was between the NDA and Mahagathbandhan, the LJP, led by Chirag Paswan, also decided to fight the polls alone.

(The above story first appeared on LatestLY on Nov 10, 2020 08:17 PM IST. For more news and updates on politics, world, sports, entertainment and lifestyle, log on to our website latestly.com).