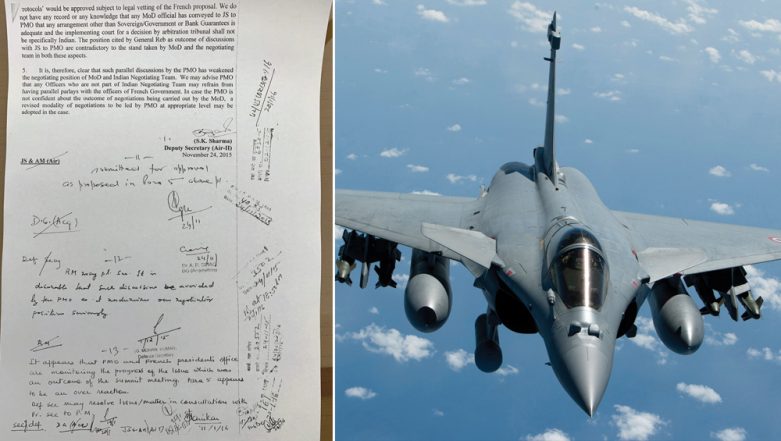 New Delhi, February 8: The controversy around the Rafale deal took a new turn on Friday when a leading daily published a note wherein the defence ministry had objected to 'parallel negotiations' that were being carried out by the Prime Minister's Office (PMO). Defence Minister Nirmala Sitharaman, however, accused the newspaper of publishing incomplete note and then quoted the full content, which includes then defence minister Manohar Parrikar's reply, in Lok Sabha.

"...parallel discussions by the PMO has weakened the negotiating position of MoD and Indian Negotiating Team," the defence ministry's note said. Reacting to the development, Sitharaman said that Parrikar had replied to the note and asked them to 'remain calm'. Parrikar had termed the officials' apprehensions as 'overreaction' and directed them to sort out the issue with Prime Minister Narendra Modi’s principal secretary. Rafale Deal 'The Hindu' Report Rocks Parliament, Nirmala Sitharaman Says 'Inquiry by PMO Isn't Interference'.

"It appears PMO and French President office are monitoring the progress of the issue which was an outcome of the summit meeting. Para 5 appears to be an over reaction. Defence secretary (G Mohan Kumar) may resolve the matter in consultation with principal secretary to PM," Parrikar, in his noting, had said. Former Defence Secretary G Mohan Kumar admitted that a dissenting note was issued by the Defence Ministry, but it had nothing to do with the pricing issue.

ANI accesses the then Defence Minister Manohar Parrikar’s reply to MoD dissent note on #Rafale negotiations."It appears PMO and French President office are monitoring the progress of the issue which was an outcome of the summit meeting. Para 5 appears to be an over reaction" pic.twitter.com/3dbGB9xF4Z

Kumar, who was the Defence Secretary from 2015 to 2017, spoke shortly after Congress President Rahul Gandhi cited the media report to contend that PMO and Defence Ministry were not on the same page on Rafale negotiations. Gandhi has been targetting PM Modi over the Rafale deal with France and asking why a 70-year-old defence public sector company Hindustan Aeronautics Ltd (HAL) was ignored for manufacturing the fighter jet.

Gandhi has also questioned how the cost of one aircraft, which was Rs 540 crore when the UPA government had signed the deal, rose to thrice its value to Rs 1,600 crore under the Bharatiya Janata Party (BJP)-led government at the Centre.