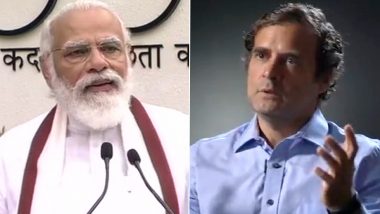 A couple of hours before Gandhi's scathing jibe against Modi on Twitter, the latter inaugurated the Rashtriya Swachhta Kendra in the national capital and also flagged off the week-long campaign to free India from garbage. 'Imagine Coronavirus Before 2014, Could We Have Imposed Lockdown When 60% Population Was Defecating in Open? PM Narendra Modi Asks.

"We all are a part of a campaign now, 'Gandagi, Bharat Chorho'. I am glad that all of us, including the children present here, are following social distancing norms and wearing masks, to control the spread of COVID-19," Modi said.

Reacting to the Prime Minister's statement, Gandhi said on Twitter that the "garbage of falsehood" should also be cleaned at the earliest. To begin with, he added, Modi should "reveal" the truth about Chinese aggression to the nation.

"Why not! We have to go a step ahead and clear the ever increasing 'dirt of untruth' in the country. Will the Prime Minister start the satyagraha by telling the country the truth of the Chinese aggression?" Gandhi remarked on social media.

Gandhi, over the past two months, has consistently questioned the Centre over the faceoff with the Chinese forces in Ladakh. He has accused the Modi government of concealing facts about the alleged incursions made by Chinese forces at some border points in Ladakh.

The border stand-off has entered into 12th week, and the process of disengagement that began last month has reportedly been stalled. The two sides are now considering to hold Major General-level talks to resolve the row, reports said.

(The above story first appeared on LatestLY on Aug 08, 2020 08:11 PM IST. For more news and updates on politics, world, sports, entertainment and lifestyle, log on to our website latestly.com).