A delegation of the BJP met the Election Commission this evening over Haryana and Maharashtra, asking that "this election be declared null and void on basis of broken rules of secrecy in voting". 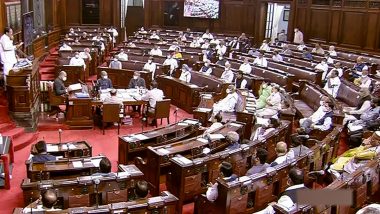 The BJP wins 3 seats in Karnataka, while the Congress managed to score one seat. The winners are Nirmala Sitharaman (BJP), Jaggesh (BJP), Jairam Ramesh (Congress).

Delhi | A delegation of BJP met with ECI today regarding RS elections in Maharashtra&Haryana. Our party has submitted complaints in specific states as well. We have asked that this election be declared null & void on basis of broken rules of secrecy in voting: Union Min MA Naqvi pic.twitter.com/UAov0pUFaF

The elections also hold significant importance as they will be held just a month ahead of the presidential elections. While the BJP’s tally is likely to remain 100, the Congress’ share in the Upper House may increase by a couple of seats.  Rajya Sabha Elections 2022: Date, Time And Candidates, Here’s Everything You Need to Know About the Upcoming Polls

Ahead of the polling, political parties moved their lawmakers to hotels to avoid being poached by the rivals. Rajya Sabha Elections 2022: Here's How Members of The Upper House of Parliament Are Elected in India

Maharashtra | Objection was raised because two MLAs gave their ballot papers to the polling agents of their parties which is a violation of rules. They can only show their ballots to their agents and not handover them to anyone: BJP Parag Alawani on Rajya Sabha elections

#UPDATE | Maharashtra: 260 MLAs have cast their votes till 1pm in the Rajya Sabha election

#WATCH | I have voted for Congress because I love it: K Srinivasa Gowda, Karnataka JD(S) leader on Rajya Sabha elections pic.twitter.com/oMSkdlYSuQ

#UPDATE | High Court upholds Special PMLA court's decision, Nawab Malik is not allowed to vote immediately. The court said that this petition is wrong and asked him to approach with the amended application before an appropriate bench.

Amid the allegations of horse-trading, the Election Commission also appointed special observers to ensure fair conduct of the electons. It has also ordered video recording of the entire process.

Finance Minister Nirmala Sitharaman is a leader of statesmanship. It is our honour to have such a political leader with no corruption background. Karnataka has benefitted because of her leadership: Karnataka Minister CN Ashwath Narayan on #RajyaSabhaElection2022

Amid poaching fears, internet was suspended in Jaipur's Amer Area, Rajasthan till 9 am on Friday ahead of polling for Rajya Sabha Election.

Karnataka | Yes, definitely. He is pressurising them not to vote for JD(S): HD Kumaraswamy, JD(S) leader on Congress leader Siddaramaiah's claims that some JD(S) MLAs in are touch with him pic.twitter.com/BHzaHr5Lt8

Ashok Gehlot Casts His Vote for the Rajya Sabha Elections.

Maharashtra will see the contest on the highest number of seats on Friday with six seats going to polls.

Some prominent leaders, whose fates will be decided at 5 pm when the counting of the votes will take place, include Union Ministers Piyush Goyal and Nirmala Sitharaman, Congress leaders Jairam Ramesh, Randeep Surjewala and Mukul Wasnik and Sanjay Raut.

(The above story first appeared on LatestLY on Jun 10, 2022 08:56 AM IST. For more news and updates on politics, world, sports, entertainment and lifestyle, log on to our website latestly.com).