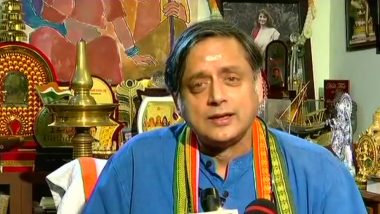 New Delhi, August 5: Senior Congress leader Shashi Tharoor accused the ruling Bharatiya Janata Party (BJP) of attempting to use the faith of India's majoritarian community to further its electoral prospects. Without mincing words, the former Union Minister charged the saffron party of attempting to "hijack" the name of Lord Ram.

"Shri Ram is not the property of BJP. He is the ideal man whose image is deeply etched in the hearts and minds of millions. Gandhiji always sang his hymns and died with 'Hei Ram' on his lips. He talked about a Ram Rajya where all would live in peace and prosperity. Can't let his name be hijacked," Tharoor said on Wednesday. Secular Parties Exposed, Says Asaduddin Owaisi After Ram Mandir Bhumi Pujan in Ayodhya.

Tharoor's remarks came shortly after the Ram Mandir Bhumi Pujan, which was welcomed in a wholehearted manner by his party as well. In a bid to deflect the criticism over Congress embracing "soft Hindutva", Tharoor claimed that the party has never rejigged its line and was always supportive of Ram Mandir construction in a legal manner.

Now that the day's events are behind us, & given the widespread misrepresentations I've been hearing, please see this thread of eight tweets: https://t.co/7cfGdny4dJ

"Let's be clear: @INCIndia was NEVER opposed to the construction of a Ram temple in Ayodhya, but to the criminal demolition of the Babri Masjid. In 1989, Rajiv Gandhi ji allowed VHP to do shilanyas on non-disputed land nearby as an alternate site (sic)," he tweeted.

"At the same time it was not Rajiv Gandhi who ordered opening of the locks at the masjid, but the district judge of Faizabad who ordered the locks to be opened in 1986," Tharoor added, as he shared the link of a Supreme Court

document to validate his claim.

At the same time it was NOT Rajiv Gandhi who ordered opening of the locks at the masjid, but the district judge of Faizabad who ordered the locks to be opened in 1986‼️

Official link of Supreme Court given below states that clearly on page 476.https://t.co/XKBLnD38nF

The Congress drew severe criticism from Hyderabad MP and All India Majlis-e-Ittehadul Muslimeen (AIMIM) chief Asaduddin Owaisi for its stance on the Ram Mandir Bhumi Pujan. After Congress general secretary Priyanka Gandhi Vadra welcomed the foundation stone-laying ceremony of the temple, Owaisi claimed that the real face of the Congress has been "exposed".

"Glad that they (Congress) are not pretending anymore. It's okay if they want to embrace this extremist ideology of Hindutva but why all this hollow talk about brotherhood? Don't be shy, please be proud of your party's contributions to the movement that demolished our Babri Masjid," Owaisi said.

(The above story first appeared on LatestLY on Aug 05, 2020 08:51 PM IST. For more news and updates on politics, world, sports, entertainment and lifestyle, log on to our website latestly.com).