The rupee has depreciated close to 11 percent this year which is the worst performer in Asia. 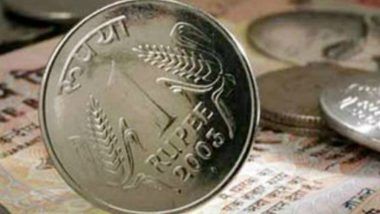 Mumbai, September 4: The Indian rupee has touched a new all-time low of 71.37 per dollar on Tuesday on the back of similar trend among its global peers and amid concerns of trade war escalation. The currency opened at 71.24 per dollar surpassing the previous low of 71.21 per dollar, at which it had closed on Monday. RBI's Efforts to Stabilise Rupee Hit Country's Forex Reserves

According to analysts, along with trade concerns, high crude oil prices and consistent outflow of foreign funds also weighed on the Indian currency. The rupee opened on a positive note on Monday as it opened higher by 19 paise at 70.80 per dollar but it reversed all its morning gains and closed lower on the back of concerns over rising crude oil prices.

The weakening of other currencies like Lira has added to the pressure. According to reports, the rupee has depreciated close to 11 percent this year which is the worst performer in Asia.

(The above story first appeared on LatestLY on Sep 04, 2018 10:41 AM IST. For more news and updates on politics, world, sports, entertainment and lifestyle, log on to our website latestly.com).