TCS Which Entered $100 Billion Elite Club, Is Now Bigger Than Total M-Cap of All Listed Stocks in Pakistan! 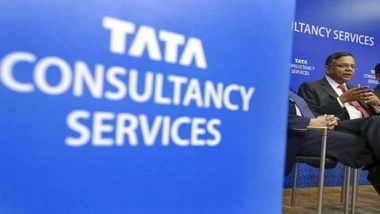 Mumbai, April 23: IT bellwether Tata Consultancy Services (TCS) on Monday emerged as the first Indian listed company to cross the 100-billion dollar mark in terms of market capitalisation (m-cap). The recent increase in TCS shares is on the back of good earnings. The company posted a net profit of Rs. 6,925 crore -- up 4.6 per cent -- from Rs 6,622 crore in the same period in 2017 and up 5.8 per cent sequentially from Rs 6,545 crore a quarter ago.

It also announced 1:1 bonus shares of Re 1 face value to its investors at the end of fiscal 2017-18. Shares of TCS had surged by nearly 7 per cent on Friday, making investors richer by over Rs. 40,000 crore in a day. According to a report on Economic Times, across the world, there are only 63 other companies in the league, incluing Amazon and Facebook. As per the report, the 100-billion figure is bigger than the total market capitalisation of all the stocks listed on Pakistan Stock Exchange. Reportedly, TCS’ $100 billion market value is 25 per cent higher than PSE stocks combined.

However, according to a report on NDTV, Global brokerage Nomura has 'reduced' on TCS shares, citing high valuations. According to reports, TCS is also one of the world’s 100 most valuable firms by market valuation and the market cap is almost 2.5 times more than its nearest Indian competitor, Infosys. The stock is currently trading flat at Rs 3,395.

(The above story first appeared on LatestLY on Apr 23, 2018 04:01 PM IST. For more news and updates on politics, world, sports, entertainment and lifestyle, log on to our website latestly.com).