All that Hailey Bieber Needs is a Gucci Blazer to Look So Stunning on Vogue India's New Cover! 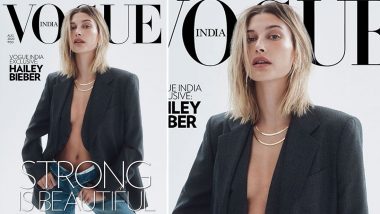 Hailey Bieber stuns on the cover of Vogue India's new edition and man, does she look hot! Justin Bieber's darling wife, who belonged to the glamour world even before her wedding agrees that the attention has been significant since her D-day. While Vogue India has previously collaborated with supermodels like Kendall Jenner and Sara Sampaio, this new cover stands apart from being less dramatic and a bit formal if we can say. It allows Hailey to mark her boundaries while also dominating their new cover without any props or colourful backdrop. Justin Bieber Says 'Still Can't Believe You Chose' As He Shares Love-Filled Pictures With Wifey Hailey Bieber (View Post).

Hailey's simply posing against a plain backdrop in her Gucci waistcoat and blazer and it's interesting to realise how this simplicity is able to attract all the awes. While Vogue is known for its extravagant photoshoots, having budgets that would put other magazines to shame, the team attempted a different approach this time and yet managed to reap in glamorous results like always. With no exotic locales and no fancy couture dresses, the team was able to extract all the quintessential fancy elements by asking Hailey to simply be herself. She looks stunning and so does the cover! Hailey Bieber Recalls the Cute Story of Her First Kiss With Justin Bieber and It's Sure to Melt Your Hearts! (Watch Video).

Check Out Her Cover

“To be honest, I don’t really think I was ever famous. Of course, I knew my father was an actor and he was famous to an extent, but if I was to compare how I grew up to how Justin (@justinbieber) did, he’s had a way crazier ‘famous’ experience really young. Whereas I got to grow up and get my driver’s licence and really be normal until the past three years of my life,” Hailey Bieber (@haileybieber) opens up about life and lockdown in an exclusive. Read more from the link in bio. Photographed by: Zoey Grossman (@zoeygrossman). Styled by: Priyanka Kapadia (@priyankarkapadia) and Maeve Reilly (@stylememaeve). Words by: Akanksha Kamath (@kamathakanksha). Hair: Bryce Scarlett (@brycescarlett). Makeup: Hailey Bieber (@haileybieber). Bookings editor: Prachiti Parakh (@prachitiparakh). Production: Adrian Rae (@adrian.rae). Assistant stylist: Naheed Driver (@naheedee)

This would be the first time Hailey Bieber has collaborated with an Indian edition of any magazine. And we must say, her debut was gorgeous AF. We are waiting for the magazine to share the rest of her pictures and we bet they're equally charming and marvellous. Let's hope the wait won't be too long.

(The above story first appeared on LatestLY on Aug 01, 2020 04:27 PM IST. For more news and updates on politics, world, sports, entertainment and lifestyle, log on to our website latestly.com).