BTS Style Guide: From BTS’ Jungkook to Suga; Take Fashion Inspiration from the K-Pop Artists to Revamp Your Wardrobe

The BTS band members are extremely popular for their unique fashion choices. If you too want to dress up uniquely then you must take inspiration from BTS' Jungkook, RM, SUGA, j-hope, Jimin, and V. 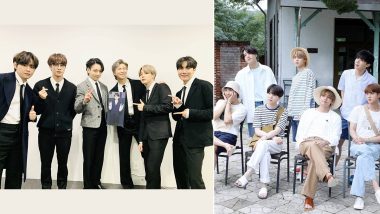 The Korean boy band BTS is one of the most popular music bands across the world. The BTS boys are not only known for their exceptional songs but also for their unique fashion choices. From wearing bold accessories to corsets, they always experiment with their fashion. No one can define their fashion; however, their sartorial choices are extremely different from others. According to the Vogue report, the band members like RM, Jin, SUGA, j-hope, Jimin, V, and JungKook have displayed a fondness for ‘sleek tailoring, occasional tuxedo, and streetwear’.

There’s clearly nothing that the extremely popular K-Pop artists can’t pull off. They are popular for wearing all the gender-defying outfits. Talking about the same, according to the Hong Kong Tatler report, BTS’ RM said, “The labels of what being masculine is, is an outdated concept. We live in an age where we shouldn’t have those labels or have those restrictions.” Indeed, they love to follow progressive fashion. Apart from that, they are also known for their dramatic and colourful accessories. If you are fond of quirky outfits then you must take fashion inspiration from BTS’s JungKook, SUGA, j-hope, Jimin, V, and RM.

Now, let us check some of the major fashion choices of the BTS artists which will help you to revamp your wardrobe.

The Korean boy band has recently celebrated their 8 years anniversary. They are currently riding high on success. On May 21, 2021, BTS’ has dropped their latest English song ‘Butter’ and since then it is topping the Billboard Hot 100 chart for three consecutive weeks.

According to Billboard, ‘Butter’ has garnered 138,400 downloads and 15.4 million streams in the United States in the week ending on June 10. And in the week ending on June 13, it also received 24.6 million radio airplay audience impressions. BTS’s ‘Butter’ has also topped the Global Excl. U.S. chart for three consecutive weeks and it has been placed second on the Global 200 chart.

(The above story first appeared on LatestLY on Jun 16, 2021 08:19 PM IST. For more news and updates on politics, world, sports, entertainment and lifestyle, log on to our website latestly.com).