Cristiano Ronaldo's girlfriend Georgina Rodriguez took to her Instagram handle to share a few stunning pictures of her from her recent Jaca trip. In the pictures, she can be seen flaunting a blazer with a denim look. 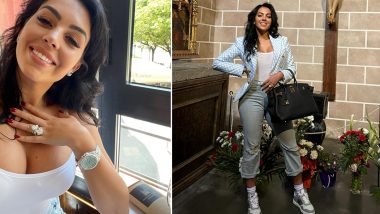 Ace footballer Cristiano Ronaldo’s Girlfriend Georgina Rodriguez is one of the sought-after celebrities across the world. The 27-year-old definitely knows how to turns millions of heads with her sartorial choices. The gorgeous diva enjoys a huge fan following on social media. She has over 24 million followers on Instagram. And everytime she posts a picture or video on the photo-sharing app it goes viral in no time. Recently, Georgina took to her official Instagram handle to share a series of pictures from Jaca's trip, a city where she lived with her parents during her childhood days before moving to Madrid.

Georgina will soon appear in Netflix’s mini reality show and thus, to shoot a few scenes in Jaca, she travelled from Portugal to Spain recently. The documentary series will showcase her life. Now, in the pictures shared by Georgina, she can be seen donning a checkered blazer paired with a white tank top and denim. To style her look, she kept tresses open and opted for minimal makeup. And to accessorise her look, she has opted for statement ornaments, a stylish watch, a classy bag, and sports shoes.

In mid-April, while announcing about series Netflix Spain’s said, “The best thing about this reality show is going to be discovering what the world would be like if it were for Georgina Rodríguez.”

They also highlighted, “Georgina rodriguez, with 24 million followers on Instagram, is, among many other things, a model, mother, influencer, businesswoman, dancer, and current partner of Cristiano Ronaldo. This reality show will be a deep and emotional portrait of the woman behind the photos, the stories and the big headlines: her day-to-day life, her motherhood, her high and low moments.”

Georgina and Cristiano are the proud parents to four children - Cristiano Ronaldo Jr., twins Eva and Mateo, and Alana Martina.

(The above story first appeared on LatestLY on May 30, 2021 02:49 PM IST. For more news and updates on politics, world, sports, entertainment and lifestyle, log on to our website latestly.com).