Who's the hottest girl in the world? We say, Esha Gupta. 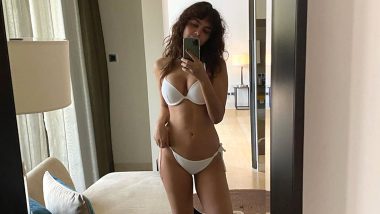 Esha Gupta is back to making your Instagram feed look hot and tempting. The Jannat 2 actress took to her social media account to share a rather sensuous selfie of hers in nothing but a pair of racy white lingerie. 'It rained on my parade' she captioned her new mirror selfie and her sentiments are echoing with Tahira Kashyap's comment on her upload. If Esha Gupta's new picture doesn't redefine the term hotness for you, then we don't know what will. HOTNESS ALERT! Esha Gupta Poses in a White Monokini at the Beach – View Pic.

Esha's Instagram account is loaded with her super hot pictures that often make our day. Just while we were thinking of ways to get rid off these mid-week blues, Esha lent us a helping hand with her incredibly hot picture. On days when the actress isn't shooting for her projects, she's busy posting such tempting new clicks that make our jaws drop. If this picture of Esha can't knock you down with a hefty dose of oomph then nothing possibly can. Esha Gupta Looks Piping Hot in her New Picture in a White Monokini.

It rained on my parade(literally ☔️)

It was during the release of Baadshaho that Esha tried setting the internet on fire with her uber hot clicks - the one where she bared it all. Hats off to this pretty lady for making a pomegranate look so sexy. However, the actress later deleted all her pictures and the reason for which is still unknown. Hopefully, she won't erase these new additions.

(The above story first appeared on LatestLY on Feb 27, 2020 04:59 PM IST. For more news and updates on politics, world, sports, entertainment and lifestyle, log on to our website latestly.com).