In one of the black and white pictures, she can be seen wearing a crop top and shorts. She is rocking a classic 90s hairstyle with her hair pulled up in a stylish hairstyle and added a pair of knee-high boots. 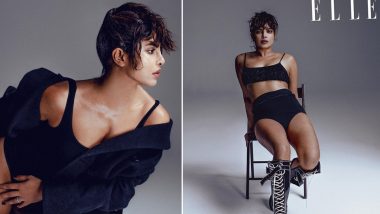 Priyanka Chopra is one of the busiest celebrities we know. Apart from working on different Hollywood projects, the actress has now even started her own haircare brand named Anamoly. Her last film, The White Tiger co-starring  Rajkummar Rao and Adarsh Gourav, also has been getting great reviews from the audience around the world. Priyanka even received an honourable mention in the Gold List selections for their powerful performances in the film. Amidst the busy work schedule, the actress squeezed in some time for a hot photoshoot for Elle UK as well. Priyanka Chopra Jonas Is Feminine Chic in a Pretty Pink Puff Sleeved Shirt!

The actress shared the pictures of her photoshoot on Instagram today and we are loving the 90s monochromatic vibe that Priyanka is giving in these photos. In one of the black and white pictures, she can be seen wearing a crop top and shorts. She is rocking a classic 90s hairstyle with her hair pulled up in a stylish hairstyle and added a pair of knee-high boots. In another photo, she can be seen pulling off a vintage look where she is seen wearing a pair of pants and a crop top.

Another sexy photo feature Priyanka in a gorgeous bodysuit, which accentuated her curves. The actress has added an oversized trench coat and black boot and bold makeup. In one of the pictures, she is even seen giving an intense look while her hands are wrapped up in weight lifting gloves. The actress looks quite stunning in these pictures and we are loving her confidence in these pictures.

The actor has become a global icon in no time and has represented the South Asian community on a global platform talked to Elle about her future plans. She told about what she told to different producers and revealed, "I came in and I said, 'I don’t mind putting my head down, working, auditioning, learning how to speak in an American accent.' I wanted to play parts. I don’t want to be defined by where I come from. I want to play leads." Priyanka Chopra Jonas Adds Another Feather to Her Hat, Announces Her Own Haircare Line Called Anomaly.

Workwise, Priyanka recently completed work on Text For You and is also developing an untitled comedy with Mindy Kaling and Dan Goor. She also is a part of Russo Brothers' Citadel and The Matrix 4. The actress also launched her memoir titled Unfinished recently.

(The above story first appeared on LatestLY on Feb 03, 2021 01:16 PM IST. For more news and updates on politics, world, sports, entertainment and lifestyle, log on to our website latestly.com).