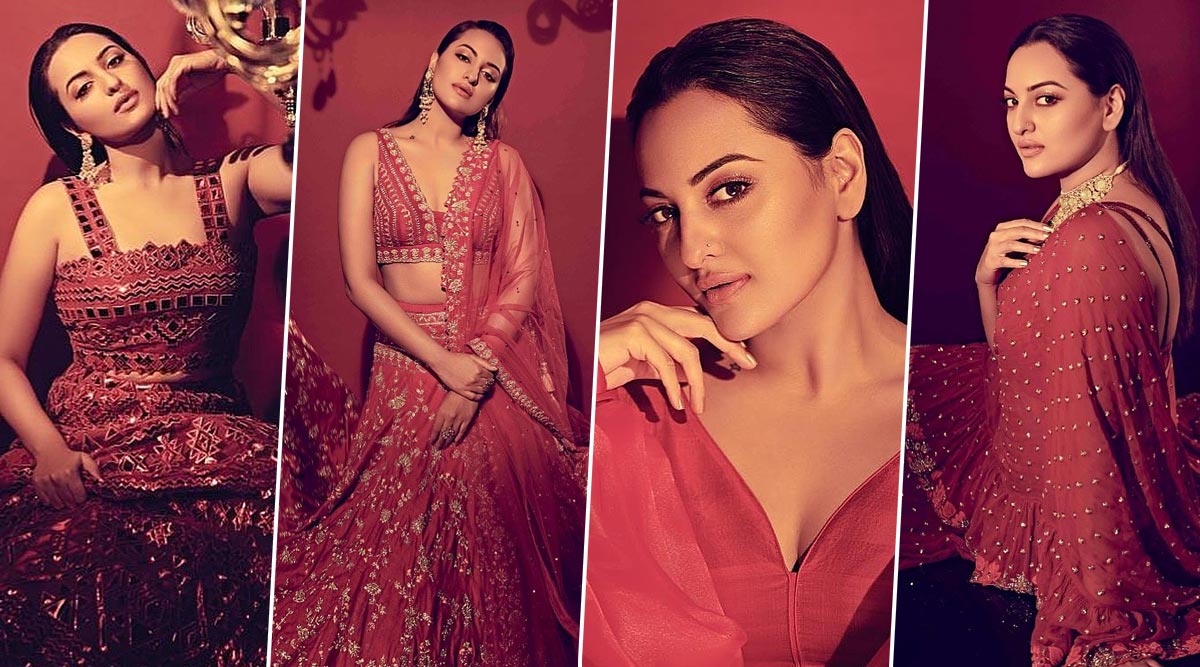 Our go-to girl crush for all things sartorial and a hint of playfulness, Sonakshi Sinha strives to create those riveting style moments and she does so with enviable ease and elan. She is amongst the few B-town stunners who go on to experiment to the hilt rendering her to be the most sought after celebrity for magazine shoots. She has us keeping up those dizzy doses of varied covers of magazines, this time we see her on the cover of Cinteblitz. Asli Sona aka Sonakshi Sinha is radiating a red glow this summer as a coy, confident and flawless bride. She also turns into a modest muse to some of the season’s must-try silhouettes in the bold red hue. It’s apt that Sonakshi is deemed as the poster girl for the curvaceous Indian woman for her penchant to opt for outfits that accentuate her form all whilst being well-versed with the contemporary silhouettes, fabrics and cuts in addition to classics. Additionally, she believes in elevating her style game further with a stunning beauty game too.

This bridal photo shoot has been lensed by The House of Pixels, styled by Sonakshi’s go-to fashion stylist Mohit Rai. The glam has been handled by celebrity makeup artist Heema Dattani and hairstylist Madhuri Nakhale. The venue for the photoshoot is The Hab by Usha. Here is a closer look at the photoshoot. Pretty and Pastel! Sonakshi Sinha Looks Resplendent in her Anamika Khanna Outfit

A Sanjukta Dutta ensemble teamed with chunky jewellery by Chedda, a slick wet pulled back hairdo and subtle glam complete this vibe.

A mirror work sleeveless dress by Reeti Arneja is teamed with earrings, pulled back hair and style glam. Sonakshi Sinha, When High Octane Glamour With a Monochrome Vibe Has All Those Snazzy Feels!

A tiered ruffle sari with thread and mirror hand embroidery blouse by Arpita Mehta was accompanied by an opulent necklace, slicked-back hair and subtle glam.

An intricately embellished Zainab lehenga by Chamee and Palak was teamed with slick hair and subtle makeup.

On the professional front, Sonakshi Sinha was last seen in Dabangg 3 with Salman Khan. She will be seen as social worker Sunderben Jetha Madharparya in Bhuj: The Pride of India featuring alongside Sanjay Dutt, Nora Fatehi, Sharad Kelkar, Ammy Virk and Pranitha Subhash. A biographical war action film directed, co-produced and written by Abhishek Dudhaiya set during the Indo-Pakistani War of 1971, it is about the life of IAF Squadron Leader Vijay Karnik, the then in-charge of the Bhuj airport who and his team reconstructed the IAF airbase with the help of 300 local women. The film is scheduled for a release on 14 August 2020.