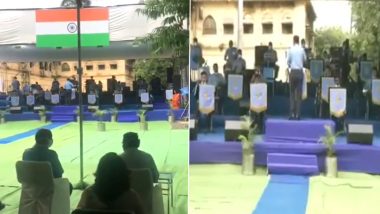 "During the ongoing celebration of the 74th #IndependenceDay, the Air Force band is mesmerizing the audiences nationwide with their musical performance. Glimpses of the show from Nagpur," IAF tweeted, sharing a video of the band's performance. A series of musical performances by the military bands are scheduled to take place across the country till August 15 when India will celebrate its 74th Independence Day. Independence Day 2020: No Big Congregations This I-Day, Celebrations Under Preventive Measures Including Red Fort Amid COVID-19 Crisis.

Tri services band will be giving three performances in Delhi, one each at Red Fort, at Rajpath and at India Gate on August 8, 9 and 12 respectively. Military and Police Bands will also perform in Mumbai, Ahmedabad, Shimla and Almora on August 8; in Chennai, Nasirabad, Andaman and Nicobar Command Flag Point and Dandi on August 9 and in Imphal, Bhopal and Jhansi on August 12. The final performance of the series will be held on August 13 in Lucknow, Faizabad, Shilong, Madurai and Champaran.

(The above story first appeared on LatestLY on Aug 06, 2020 11:02 PM IST. For more news and updates on politics, world, sports, entertainment and lifestyle, log on to our website latestly.com).