Maharana Pratap Jayanti 2020: Incredible Facts About the 13th King of Mewar to Share on His 480th Birth Anniversary 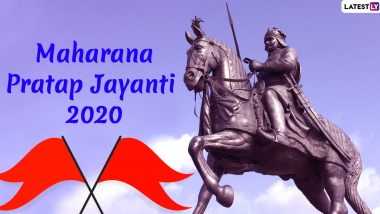 Maharana Pratap, one of the greatest warriors in the history of India is the man that signifies valour and love for his land was born on May 9, 1540, as per the Gregorian calendar. However, the Indian states of Rajasthan and Haryana celebrate the King's birthday on the third day of the Hindu month of Jyeshta which falls on May 25 this year. The 13th ruler of Mewar spent a major part of his life with the aim of liberating his land from the clutches of Mughals. On his birth anniversary, we take a look at some interesting facts surrounding his life. Happy Maharana Pratap Jayanti 2020 Wishes: WhatsApp Messages, Images, Quotes and Greetings to Send on Great Warrior's Birth Anniversary.

After the death of his father Maharana Udai Singh II in the year 1572, there was a brief power struggle and Maharana Pratap emerged as the king. Since Chittoor which was the capital of the Mewar kingdom was under the occupancy of the Mughals, a major part of his life was spent in its capture. Maharana Pratap fought many a battle in order to win back his land and the strength displayed in these wars made him a cult hero. Maharana Pratap Jayanti 2020 Wishes in Hindi: WhatsApp Stickers, Facebook Messages, Quotes, HD Images and SMS to Send on Rajput Warrior's Birth Anniversary.

• Maharana Pratap had a daunting personality as he stood 7 feet 5 inches tall. He was the eldest son amongst 32 children of Maharana Udai Singh.

• He ascended the throne of Mewar post the death of his father despite his stepmother Rani Dheer Bai wanting Kunwar Jagmal to rule the kingdom.

• Maharana Pratap refused Akbar diplomatic mission many a time despite the majority of Rajput Dynasties surrendering in front of the Mughal ruler.

• During the battle of Haldighati, he sliced Mughal opponent Behlol Khan into two along with his horse.

• Whenever Maharana Pratap went into battle, he used to carry a weight of 360 kgs. This included two swords of 208 kgs, an 80 kg spear and an armour weighing 72 kg.

• Maharana Pratap made a pledge that till the time he succeeded in winning back Chittor, he would only eat in a leaf plate and sleep on a bed of straws.

• His loyal horse Chetak gave up his life saving his master in the battle of Haldighati. Despite severely wounded, he carried Maharana Pratap away from the battle to safety.

• Maharana Pratap’s elephant Ramprasad who crushed many Mughal opponents, gave up his life on being captured after 18 days of imprisonment.

• Maharana Pratap once made rotis from the grass as he struggled in a jungle, hiding from his enemies. A cat took away the rotis meant for his daughter which prompted him to write a letter of surrender to Akbar.

• Maharana Pratap did manage to win a majority of his stronghold by 1584 with the Mughals busy with battles in Punjab.

• An injury received while tightening the string of a bow for hunting cost Maharana Pratap his life in 1597. Akbar's dream of capturing him alive could not be fulfilled.

Maharana Pratap legacy is not restricted to his battles with the Mughals but the true greatness of the man can be gauged from the fact that he remains India’s first native freedom fighter.

(The above story first appeared on LatestLY on May 25, 2020 10:27 AM IST. For more news and updates on politics, world, sports, entertainment and lifestyle, log on to our website latestly.com).