There will be day-long programmes at the Sai Baba Temple in Maharashtra's Shirdi starting October 17 for three days to celebrate 100 years of Sai Baba Maha Samadhi. 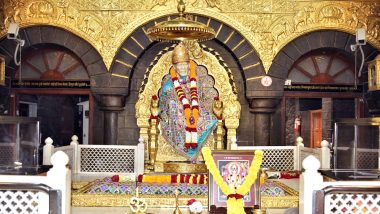 Sai Baba Samadhi day is celebrated every year from October 15. This year the celebrations are on a grand scale since it is the 100th centenary celebration. Sai Baba died on October 15, 1918. He is known as the one worshipped by all as nobody knew his real name or religion. During the Sai Baba Punyatithi celebrations, devotees in huge numbers throng the Shirdi Sai Baba Mandir to seek blessings of the lord. Shirdi Sai Baba Temple Gets Donations Worth Rs 6,40,95,305 During Guru Purnima Celebrations This Year.

Earlier this year, the image of Sai Baba could be seen on the wall of Dwarkamai in Shirdi Sai Temple, said devotees. According to reports, Sai Baba's image was seen on the wall for about three hours. The followers at the temple said that Sai Baba could be seen smiling in the image which was 2x2 feet in size. The image was also shown by certain news channels.

Devotees head to Shirdi Sai Baba Temple in large numbers. Many stay overnight to witness the early morning 'Kakad Aarti'. Known as a 'Fakir', Sai Baba first made his appearance in Shirdi as a youth and remained there throughout his life, devoting his life in the service of people.

(The above story first appeared on LatestLY on Oct 15, 2018 11:19 AM IST. For more news and updates on politics, world, sports, entertainment and lifestyle, log on to our website latestly.com).