World Sanskrit Day 2020 Date And Significance: Know The History of the Observance That Celebrates the Ancient Indian Language 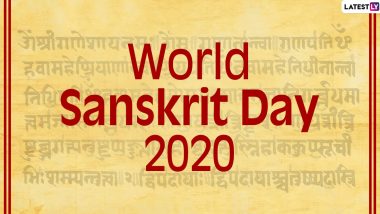 World Sanskrit Day, also known as Sanskrit Diwas is observed to revive the ancient language of India. The old Indo-Aryan language is celebrated on Shraavanapoornima which is Poornima day of Shraavana month as per the Hindu calendar. World Sanskrit Day 2020 falls on August 3. Sanskrit organisation Samskrita Bharati promotes the day every year. The Sanskrit language is believed to have originated in India around 3500 years ago. The term Sanskrit is derived from the conjoining of the prefix 'Sam' meaning 'Samyak' which indicates 'entirely' and 'krit' indicates 'done'. Today, Sanskrit has been declared as a classical language that is known for its scientific structure and is in high demand all over the world. Know History, Significance and Importance of Sanskrit.

The Sanskrit language is also termed as Dev Vani means God's language. It is believed that the language was generated by the God Brahma and passed it to the rishis or sages who living in celestial abodes. They then further communicated it to their earthly disciples and thus it spread. The Sanskrit language in its written form can be traced back to the 2nd millennium BCE when the Rig Veda is assumed to have been written. Sanskrit in literary terms is classified into two different periods, the Vedic and Classical. According to the Vedas sacred texts, Vedic Sanskrit is found mainly in the Rig Veda, the Puranas and the Upanishads. They were composed in the period 1000 to 500 BCE.

World Sanskrit Day or Sanskrit Diwas was first time celebrated. in 1969. Several events and seminars were held about the language. Some of the popular Indian folk tales are written in the Sanskrit language. An English Scholar in Sanskrit, William Jones who came to India as a judge of the British Supreme Court in Calcutta in 1783 was quite impressed by the language. He founded the Asian society and translated several books into English namely Abhijana Shakuntala, Ritu Samhara, and Gita Govinda. He also translated Manusmriti into English.

(The above story first appeared on LatestLY on Jul 31, 2020 02:18 PM IST. For more news and updates on politics, world, sports, entertainment and lifestyle, log on to our website latestly.com).