World Turtle Day 2020 Date And Significance: History & Celebrations of the Observance That Promotes Survival of Turtles And Tortoises

World Turtle Day is observed on May 23 to raise awareness about the need for human action to help the survival of turtles. The day was founded by American Tortoise Rescue since 2000. This year you can celebrate the day by posting photos and your thoughts with the hashtag #WorldTurtleDay2020 on Twitter. 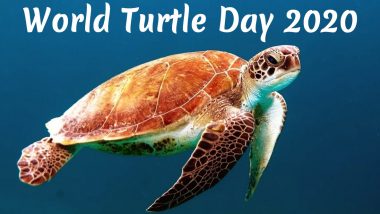 World Turtle Day is observed on May 23 to raise awareness about the need for human action to help the survival of turtles. The day was founded by American Tortoise Rescue since 2000. The day is celebrated in various ways across the globe. While some dress their children as turtles to schools, others observe the day by conducting workshops educating others about their habitat. In classrooms, crafts, paintings and drawings on the day are encouraged. While celebrations have been curtailed this year, you can still observe the day by educating your children about turtles. You can also share photos and your thoughts with the hashtag #WorldTurtleDay2020 on Twitter. World's Oldest Tortoises: Alagba of Ogbomoso Dead; Here's A List of Other Shelled Animals Who Lived Beyond 100 Years And The Ones Who Continue to Live Past Century.

American Tortoise Rescue (ATR) was founded in 1990 by husband and wife team Susan Tellem and Marshall Thompson. It is a nonprofit organisation that rescues and rehabilitates all species of tortoise and turtle. It also does a lot of work on protecting the environments in which these animals live. They will always try and find new homes for the animals but if this is not possible then they will remain in the care of the ATR.  Giant Tortoise Helonoidis Phantasticus Believed to Be Extinct for More Than a Century Found in Galapagos Island (See Pictures).

Turtles are among the oldest and most primitive groups of reptiles. They evolved millions of years ago and are present all over the world in different climatic conditions. Turtles are very adaptive and can be found on every continent, except Antarctica. Most turtle species are found in southeastern North America and South Asia. Loss of habitat is one of the main problems faced by turtles which is reducing their population. On World Turtle 2020, let's pledge to protect their ecosystem.

(The above story first appeared on LatestLY on May 22, 2020 07:00 PM IST. For more news and updates on politics, world, sports, entertainment and lifestyle, log on to our website latestly.com).