Is It Dry Day Today on Gandhi Jayanti 2020? Restaurants and Bars to Not Sell Alcohol on October 2 Observing Mahatma Gandhi’s 151st Birth Anniversary

You wonder why? Well, Mahatma Gandhi was a man of high principles and a stern follower of his ethics. He was himself a teetotaller and would urge people to give up on such bad habits. He believed that consuming alcohol is not only bad for an individual’s health, but is also worse for society at large. 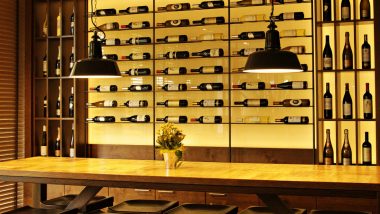 Is it a dry day today? The answer to your very important question is yes. It is a dry day on October 2 as the country observes the 151st birth anniversary of Mahatma Gandhi. Born Mohandas Karamchand Gandhi, he was one of the most popular leaders during India’s struggle for freedom. His birth date is observed in high regards across the country. So much so, that the government has declared the day of Gandhi Jayanti as a national holiday. Not just that, the occasion of Mahatma Gandhi’s birthday is also observed as a dry day in India as per the alcohol laws of India that prohibits the sale of alcohol in restaurants and bars. Yes, they are not allowed to sell liquor on 2nd of October anywhere in India, be it Mumbai or Delhi, Bangalore or Chennai. Gandhi Jayanti 2020: Why Is Gandhi Jayanti a Dry Day? Is Gandhi Jayanti National Holiday? Are Restaurants Closed on Gandhi Jayanti? FAQs Answered!

You wonder why? Well, Mahatma Gandhi was a man of high principles and a stern follower of his ethics. He was himself a teetotaller and would urge people to give up on such bad habits. He believed that consuming alcohol is not only bad for an individual’s health, but is also worse for society at large.

To commemorate his thoughts, teachings, and learnings, and as a mark of respect, the day of Gandhi Jayanti is observed as a dry day across the country. If you think that bars, pubs, and restaurants are closed, then you are mistaken. It is just that these places do not serve alcohol of any types or in any form. However, the rest of the services are in full operation. Dry Days in India: Check Full List of Dry Days in 2020 Calendar With Dates When Alcohol Will Not Be Available for Sale in Bars, Pubs and Liquor Shops.

Mahatma Gandhi was a person who strongly believed in truth and non-violence. The United Nations, to honour him, celebrates his birthday by observing it as the International Day of Non-Violence. In India, the government observes it as Rashtriya Swachhta Diwas, as Gandhi was an ardent supporter of cleanliness, sanitation, and hygiene as well.

Gandhi Jayanti is observed as a national holiday and people do head out for some entertainment and chill time with their family or friends. However, people who like to booze on holidays will be a bit disappointed as it is a dry day. But worry not, except for liquor, there’s nothing else that is banned on this day. With Unlock 5 guidelines in place, you will be pleased to find some other activities to enjoy that are allowed by the government.

As we observe Gandhi Jayanti today, we at LatestLY, wish Mahatma Gandhi’s soul rests in peace. And you, my friend, will have to observe a dry day, because ‘Bapu is watching!’

(The above story first appeared on LatestLY on Oct 02, 2020 08:10 AM IST. For more news and updates on politics, world, sports, entertainment and lifestyle, log on to our website latestly.com).