The baby survived massive injuries to the liver, fracture in the right thigh bone and gashes to his lips. 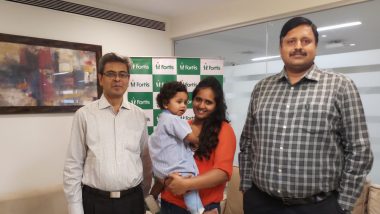 On January 3, 2019, the parents of a distraught 14-month-old baby boy Atharva, rushed the child to the hospital. The toddler was brought in with injuries he sustained after falling from the 4th floor of their Deonar home. Atharva had strayed into the balcony, which was not protected by safety grills, while his grandmother was hanging out clothes to dry. But the child survived the accident thanks to the tree branches around the building that cushioned his fall. The toddler was rushed to a nearby hospital immediately, but he was then shifted to Fortis, Mulund since he needed tertiary medical facilities.

According to the hospital sources, the child was brought in to the hospital in a conscious yet critical state. He was under the care of Dr Rajan Doshi, Senior Paediatric Consultant and Dr Sameer Sadawarte, Head-Paediatrics ICU. A team of emergency and trauma specialists, and orthopaedic experts initiated the treatment immediately. It was observed that the baby suffered from massive injuries to the liver, fracture in the right thigh bone and gashes to his lips. Atharva’s lungs were filled with air and fluid and his abdomen was bloated. After being shifted to paediatric intensive care unit, he was subsequently put on ventilator support. Mumbai Miracle: One-Year-Old Child Falls From Fourth Floor Balcony in Deonar, Suffers No Injuries.

Considering his age and the clinical condition, doctors managed him with medical treatment, devoid of any surgical intervention. He was kept on ventilator support for five days, and repeated blood transfusions were done to bring his lungs and liver back to normal working condition. Post the five days on oxygen support, baby Atharva was shifted to the general ward, for further observation. He was then treated for his hip fracture by Dr Sachin Bhonsle, Senior Orthopedic Surgeon at the hospital, who put-in the spica cast to immobilise and facilitate healing of the injured hip.

Dr Rajan Doshi said, “Despite his fall from the fourth floor, we were able to treat the child without any surgical intervention; he has gone home stitch-free. What made us more confident is that baby Atharva’s parents had full faith in us. We have advised the parents to bring him for a follow-up in a week”.

Speaking about the baby’s current medical condition, Dr Sameer Sadawarte said, “The baby is recovering very well, his Liver and Lungs have also started functioning normally. Thanks to the presence of mind of his parents who rushed him to the hospital immediately, he was able to survive something which could have turned fatal, if there was a delay in getting medical aid”.

Speaking about the incident, Atharva’s father Ajit Barkade said, “We thank the doctors at Fortis Hospital, Mulund who took my child under their wing and ensured a speedy recovery. We’ve learnt a big lesson through this episode, and we urge all parents to baby proof their homes”.

(The above story first appeared on LatestLY on Jan 28, 2019 07:35 PM IST. For more news and updates on politics, world, sports, entertainment and lifestyle, log on to our website latestly.com).