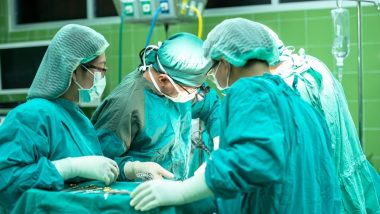 A man suffering from a swollen eye socket in China was found to be carrying a four-inch-long twig inside his skull. The 41-year-old patient had fallen to the end of a sharp branch while working on a rubber tree in Yunnan province. Unable to bear the pain he had removed the branch from his eye himself and did not seek any medical assistance as he couldn't afford it. While the incident happened five years, he has been constantly suffering from pain in the eyes. The man surnamed Zhou said that he 'felt fine' but had occasional headaches. He has three children and lives with his family in Mojiang Hani Autonomous County. Doctors Removing an Ant From Vietnamese Man’s Ears Will Make Your Stomach Churn (Watch Video)

According to Chuncheng Evening News, the branch entered the socket of his right eye and pierced through his skill. While he has been working in the fields every day since then, about two months ago his right eye began to hurt badly. It swelled and pus began to accumulate in the area. As the pain grew severe, he decided to consult a doctor. Doctors in Delhi Remove 24-Kg Tumour, Nearly the Size of Two Footballs, From Tanzanian Man’s Abdomen.

On examination, doctors were terrified to find out twigs in his brain. Medics at Yunnan First People's Hospital found an 11 cm long twig which was surrounded by a protective layer of cells. Doctors had to perform an eight-hour long operation to remove the twig from the man's brain. The foreign object had broken into eight pieces. Zhou's eyesight has not been affected in the surgery and he is expected to fully recover soon. Woman Diagnosed With Throat Tumour; Doctors Shocked to Find Two-Inch-Long Leech Inside it (Watch Viral Video)

Dr Tao Weihua of the hospital's neurosurgery department was quoted as saying, "It could have easily pierced the blood vessels and his brainstem, which could have resulted in death." He said the twig miraculously avoided all major blood vessels just one centimetre.

(The above story first appeared on LatestLY on Jun 29, 2019 09:41 PM IST. For more news and updates on politics, world, sports, entertainment and lifestyle, log on to our website latestly.com).