A 60-year-old Italian woman just stuffed her olives during the procedure to remove a tumour, reportedly from her left temporal lobe. The neurosurgeon at the hospital reported that the two and half hour procedure went ‘very well.’ 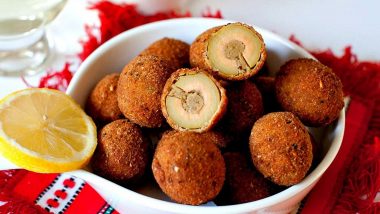 During brain tumour operations, a lot of patients have been in the past encouraged to engage in other activities. The process is known as awake brain surgery, also known as an awake craniotomy. The procedure is performed on the bran while one is awake and alert. Several instances of patients playing guitar or violin have made the headlines. But stuffing olive while undergoing brain surgery is rare. A 60-year-old Italian woman just stuffed her olives during the procedure to remove a tumour, reportedly from her left temporal lobe. The neurosurgeon at the hospital reported that the two and half hour procedure went ‘very well.’ Brain Tumour Patient Plays Violin as Doctors Perform Critical Surgery at London's King's College Hospital.

The unnamed patient reportedly prepared 90 stuffed olives as she underwent brain surgery. Her activity allowed the surgeons to calibrate their work as they operated on the patient’s left temporal lobe, which controls language and complex movements on the right side of the body. The surgery involved 11 different medical staff at the Neurosurgery Department at the Azienda Ospedali Riuniti in Ancona, central Italy. Dr Roberto Trignani, who was part of the medical staff, reported that the complicated procedure went “very well.” He further added that he had performed 60 operations with patients wake, and this was the first time, when his patient was preparing stuffed olives.

Stuffed olives, or ‘olive ascolane’ is a traditional Italian food. They consist of pitted green olives wrapped around balls of seasoned meat and are coated in flour, egg and breadcrumbs before being fried. The report came in after a video of a patient at King’s College Hospital in London was captured playing the violin while surgeons operated on her brain to remove a tumour.

Awake brain surgery is used to treat some neurological conditions, including some brain tumours or epileptic seizures. To help the surgeon try to inflict minimal damage on healthy tissue, the patient can be asked questions or even encouraged in any activity during the procedure.

(The above story first appeared on LatestLY on Jun 10, 2020 07:47 PM IST. For more news and updates on politics, world, sports, entertainment and lifestyle, log on to our website latestly.com).